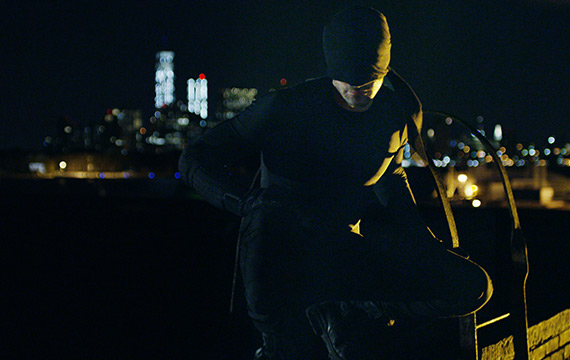 The first images from Marvel’s Daredevil have been released during New York Comic-Con! The highly-anticipated live action 13-episode show will premiere in 2015 on Netflix and follows the journey of Matt Murdock. Murdock was blinded as a young boy but imbued with extraordinary senses, now fighting against injustice by day as a lawyer, and by night as the super hero Daredevil in modern day Hell’s Kitchen, New York City.

This will be Marvel’s first original series on Netflix, and it is executive produced by series showrunner Steven S. DeKnight (“Spartacus,” “Buffy: The Vampire Slayer,” “Angel”) and Drew Goddard (“Cabin in the Woods,” “Lost,” “Buffy The Vampire Slayer,” in addition to writing the first two episodes of “Marvel’s Daredevil”), along with Marvel TV’s Jeph Loeb (“Marvel’s Agents of S.H.I.E.L.D.,” “Smallville,” “Heroes”).

“Marvel’s Daredevil” is produced by Marvel Television in association with ABC Studios for Netflix.

'Edge of Tomorrow' Review: A Movie You Won't Mind Seeing Again... And Again

David Spade Will Be Returning as Joe Dirt in 2015