Voting PSA Features ‘Orange is the New Black’ Star Natasha Lyonne, Lena Dunham and More Lip-Syncing ‘You Don’t Own Me’ 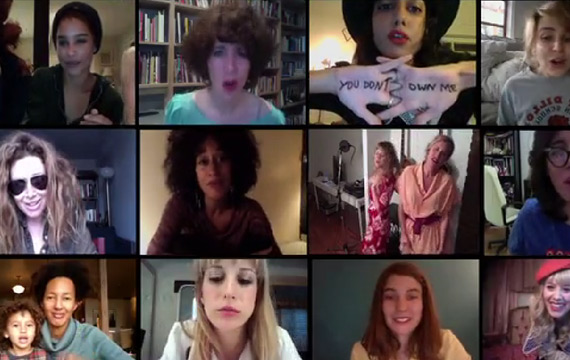 Female stars including Lena Dunham, Alexa Chung, Traci Ellis Ross and Natasha Lyonne joined in to lip sync anthem “You Don’t Own Me” by Leslie Gore and bring awareness to the need for women to step up to the polls and vote next in next month’s midterm elections.

Although may be older than I am, the message still rings true and it’s up to we as women to get out and vote for the politicians that match our individual stances on the issues concerning us that are (for some reason) currently up for debate.

The message displayed below the video on Vimeo reads:

In 2013, there were more laws passed to limit women’s reproductive rights than in the entire previous DECADE.
Ten million more women than men voted in the last election. In fact 53% of voters were women. That is not a voting block it’s a majority. Women have decided literally every election in our lifetimes, yet, midterm turnout is historically low. LET’S CHANGE THAT!
Many of us may have access to good health care, but our experience being a woman – and our rights – shouldn’t depend on our zip code. Our sisters in Texas, Wisconsin, North Dakota, Ohio, Arkansas, and so many other states don’t have what we have. The most regressive, anti­woman, anti­voting, anti­equality laws are being passed on the state level. This is why the MIDTERMS are so important.
It’s not enough to vote – we have to vote like our futures are on the line­ because they are. That means you vote, but you also talk about voting. You post about voting. You bring some pals to the polls.
There is a war being waged on women’s rights and we must fight back with everything we’ve got. Please VOTE on Nov.4th!

You can watch the creative sing-along, with an intro and closing from songstress Gore herself, below and be sure to go vote on Nov. 4th!