Where do I even begin with The Battle at Kemble’s Cascade?

This game is an anomaly. It’s the sort of thing that doesn’t seem possible. A board game based on the top-down arcade shooters of the year before yesteryear? Guffaw!

But here’s the thing: it works. It works really well. It shouldn’t exist but here it is and it’s about as faithful to a SHMUP as I think a board game could possibly be and it’s lots of fun and it’s even better with more people and it has mini-bosses and giant multi-tier bosses and power-ups and upgradable weapons and I’m rambling now I’m sorry I’ll stop.

Inside the box – which incidentally is something of a pain in the butt to open as the lid is a smidgeon too tight – you’ll find five player boards along with a ship mini and colored cubes of varying sizes for each, fancy little plastic rock-looking things that act as currency, several sets of cards that will eventually make up the game board, ship upgrade cards, achievement cards, mission cards, power-up cards, cards that double as turn order deciders and a way to cover-up destroyed enemies, and a set of rather unseemly plastic trays. I’ve noticed that some of the colored cubes are a bit misshapen or have badly cut seams, but oy those trays. They’re what you put the larger “level packs” cards in and I hate them about as much as I know I need them. 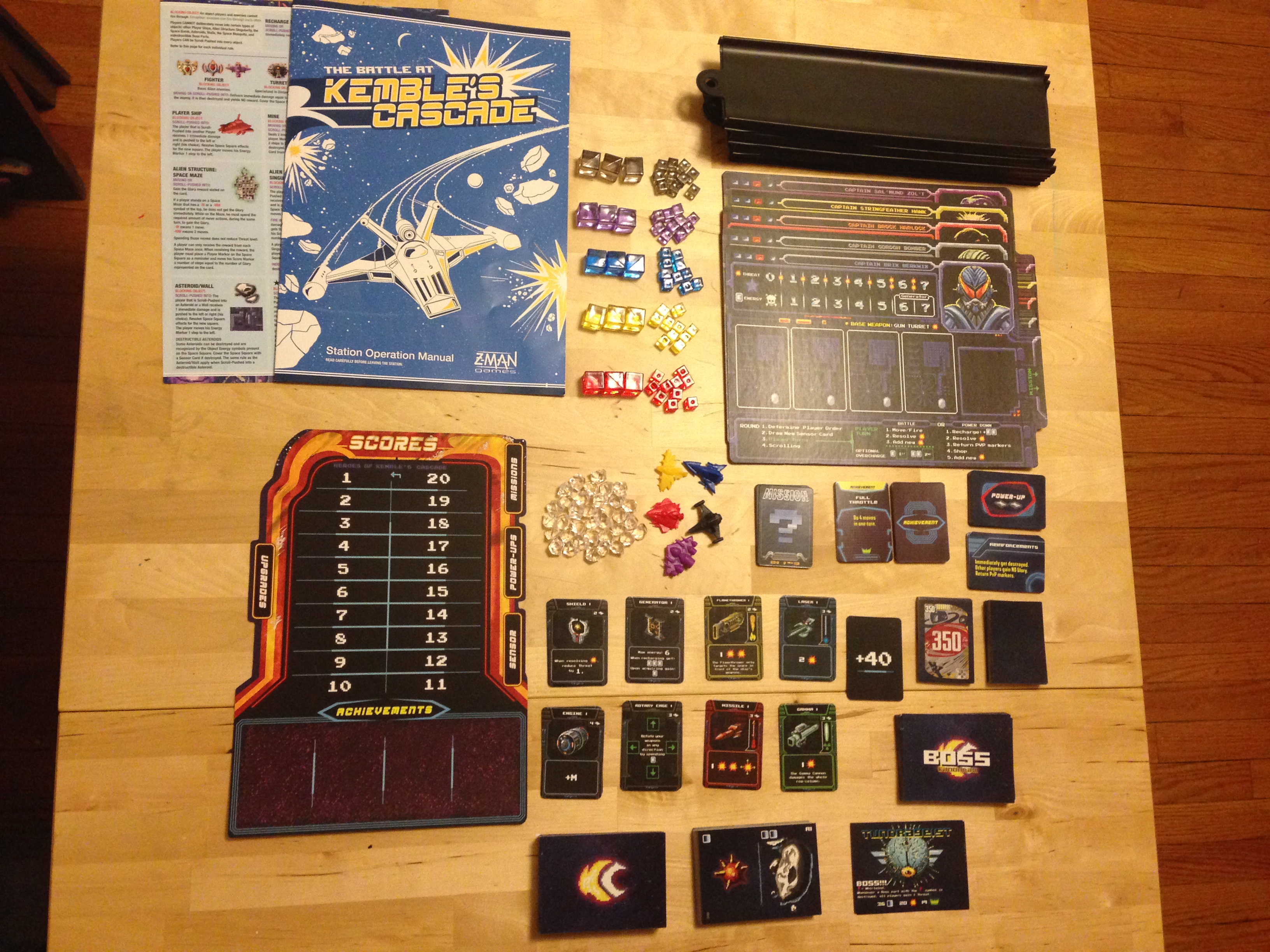 My issue with these trays (of which there are a total of 10) is that they look pretty not great, they feel pretty not great, and they make a terrible noise when you slide them along a flat surface. However they’re also important because the entire point of Kemble’s Cascade is to emulate a top-down shooter from the arcades of old – right down to the scrolling screen. And so, you need to use these trays to hold the level cards so that you can easily shift everything in-between each round. The bottom tray (i.e. bottom of the screen) gets cleared out, everything moves down, and the now-empty tray goes to the top for you to place new level cards into. It’s a clever system and I like how well it conveys the sense of a scrolling screen, as well as keeping you moving forward whether you like it or not, but those trays, man.

But enough about the trays. There’s definitely more to Kemble’s Cascade than the trays. For example there are more level cards than you’ll ever use in a single game, and each one gets shuffled every time, which means you’ll likely never see the same exact “level” twice. The layouts can become particularly insidious at times, requiring you to pull of some fancy maneuvers if you don’t want to face-plant into an asteroid. There are also power-ups you can grab by flying over them and energy you can use to replenish your reserves, enemies to destroy for money or glory (or just to get them out of your way), wormholes, space mines, and more. 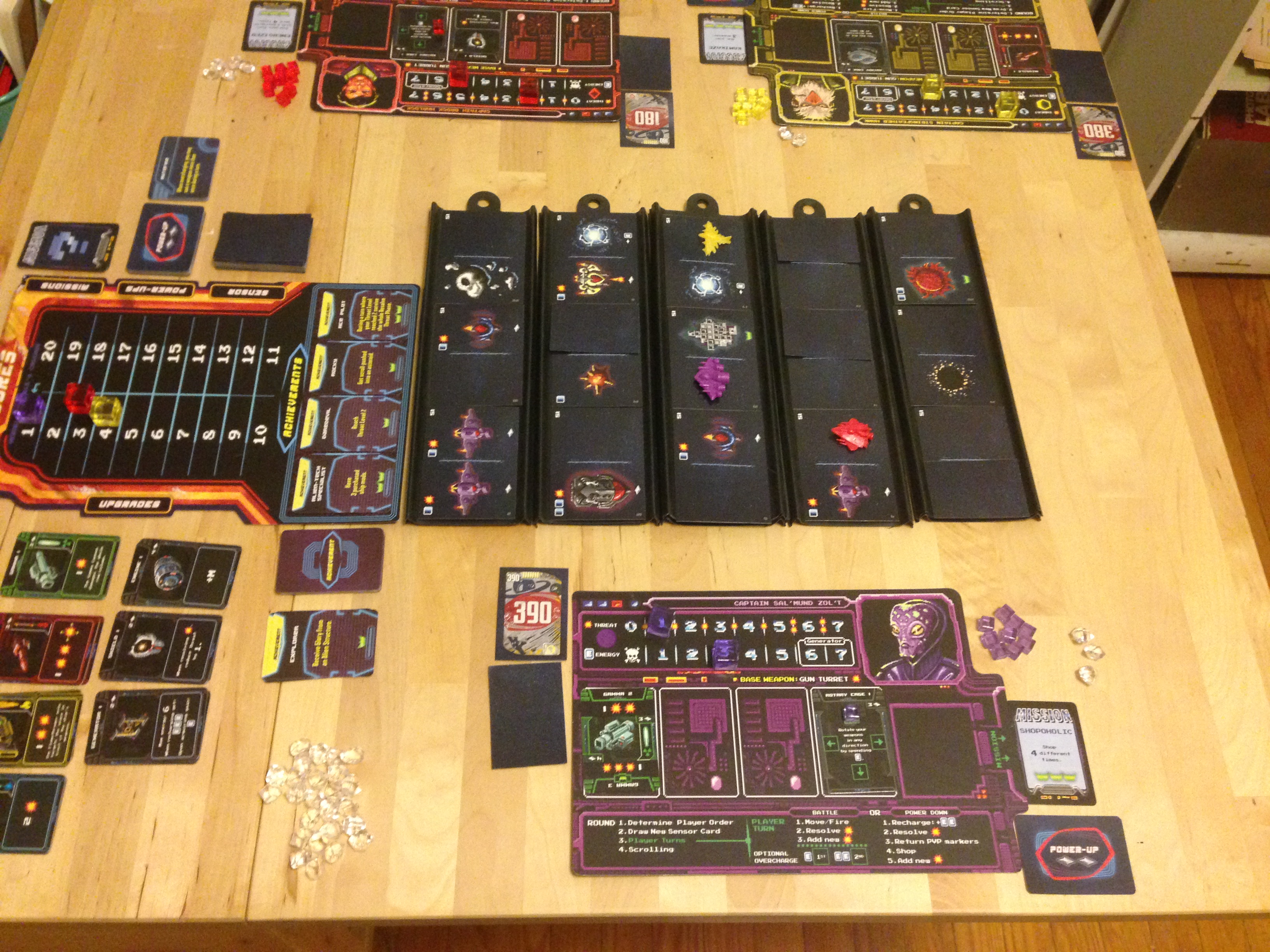 Your goal in all of this is to simply come out on top. When certain enemies are destroyed, other players are blown up, alien structures are interacted with, and so on, you’ll earn Glory. And whoever has the most Glory by the time you all destroy the stage boss (or run out of screen) is the winner. There’s also an achievement system in place that gives all players a chance to earn some extra glory be performing certain tasks, which can include anything from installing three different types of weapons to simply getting blown up. You’re also given individual missions at the start of the game as yet another means to earn some extra glory. But really what it all boils down to is come chaotic jockeying for position and points.

You aren’t immune to danger, however. Aside from things like asteroids that will damage you if you crash into them and black holes that will outright destroy you, there are also plenty of enemies that will be taking shots at you. The way it works is that whenever you end your turn once space away from a baddie (including diagonally), you take threat equal to the number of little “pew-pew” icons on their card. During your next turn you can try to reduce threat by moving (i.e. dropping it by one for every space moved), but if there’s any left by the end you’ll lose energy equivalent to the remaining threat. Which means if you have two energy and 2+ threat, you’re toast. Unless you have fancy shields or something, anyway.

Players can also take shots at each other to increase another’s threat and add a PvP cube to their board. Because of this they’ll still have the chance to avoid the shots on their next turn, so it’s not really as mean as you might think. However when a player is destroyed you’ll earn an additional point for each cube you have on them. Assuming you yourself haven’t already been spaced, of course. 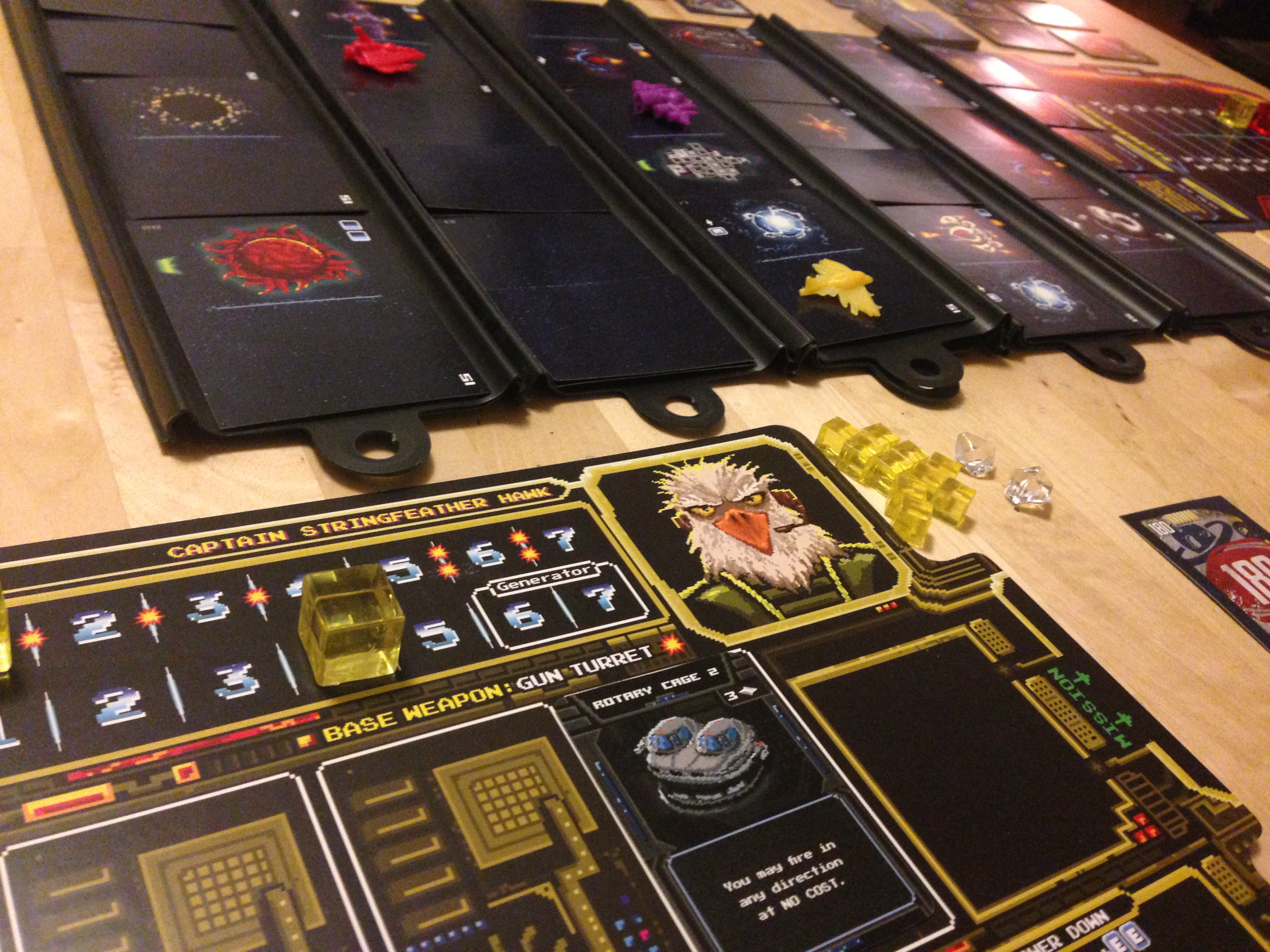 What makes Kemble’s Cascade so much fun for me is in how crazy things can get. In one game somebody used a power-up to bend time and space and surround another player with asteroids. In that same game I unloaded all the firepower I could into someone else in a desperate bid to get some last-minute points, only to make a poor decision with regards to positioning my ship so that they crashed into me and we both went up in smoke. Thankfully there’s very little penalty to getting blown up (apparently everyone has infinite lives), but any players still on the board get extra points when another player goes kaput, so it’s still something to avoid when possible.

I do want to point out that the game’s solo rules are kind of not good. As it reads in the manual:

“Can you defeat the Boss without getting destroyed? Play with a width of two Space Cards (Boss Cards 2-3 and 6-7)> Specific scenarios (exact ordering of Space Cards) will demand perfection.”

That’s not an excerpt from a larger section, those are the solo rules in their entirety. I did a little digging online and apparently they plan to have an online source for players to find specific scenarios, but I mean come on, they couldn’t include one or two in the box? Really? And now that I’m looking at it more closely, the color for one of the game’s characters is wrong. The robot-looking dude is blue, but on the box he’s green, and the green ship is actually purple. That’s super-nitpicky of me, I know, but now it’s going to bug the crap out of me.

If it seems as though I’m being tough on The Battle at Kemble’s Cascade it’s only because I really enjoy it and want it to put its best face forward to that it’ll impress all the other board games on the playground during its first day. Yes, I’m helicopter parenting a board game. Regardless, even with some component issues and a perceived lack of interest in solo support, it does a bang-up job of turning the craziness of a SHMUP into a board game that’s loads of fun.