Heidi Klum outdid herself by transforming into a realistic-looking butterfly for her annual Halloween party on Friday.

The TV personality, who is famed for her elaborate costumes, was unrecognizable as the colorful insect as her nose disappeared under prosthetics and large fly eyes and feelers were attached to her head.

Klum, who documented the lengthy make-up process on her Twitter.com page, wore a multi-colored leotard with attached wings while the rest of her body was painted blue and purple with black spots. 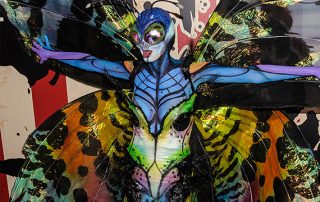