It didn’t take long for my interest in Captain Toad: Treasure Tracker to rise up when first learning about it at this year’s E3. However, I became completely sold on the title after getting my first hands-on time with the game at a recent preview event.

One of the levels I played, and probably my favorite level, was a stage based on timing to the beat of a song. I love playing games that are synced to music so it was obvious that I was going to fall in love with this level which featured blocks that faded out and reappeared after every fourth beat. Even though I did beat it my first time around, there are a couple of sections with that level that need to be timed perfectly. In order to successfully get through a specific zone, players must quickly move over the changing blocks and climb a ladder to the second zone before the blocks switch, causing the player to fall. Even though it sounds edgy, it’s very entertaining in a nice and relaxing way. 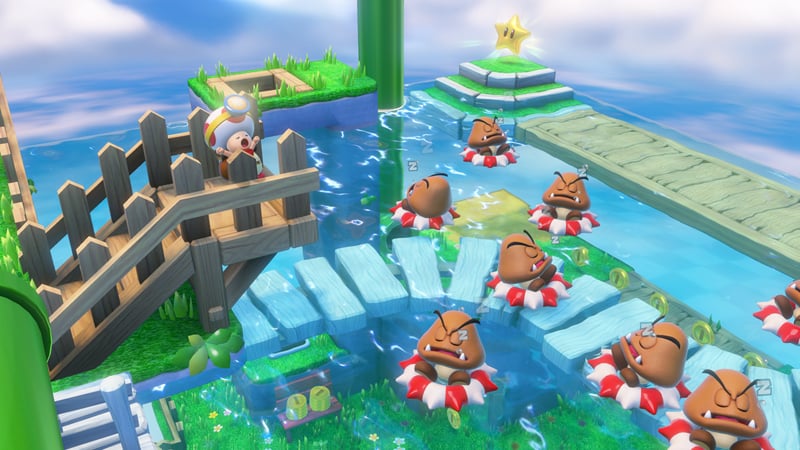 Actually, saying that describes my short time with Captain Toad perfectly – entertaining in a nice and relaxing way. Sure there are moments where players may tense up to the difficult challenge, and I can’t say how the difficulty is the rest of the way through the game as it may gradually get tougher. Heck, I don’t even know if the game has an even more challenging mode to unlock later on. However, Captain Toad: Treasure Tracker feels like a video game meant for pure relaxing enjoyment.

I wasn’t on the edge of my seat while playing the game. It’s not really intended for that. Instead, I was sitting back trying to figure out the challenge ahead to complete the stage. It’s a pure video game that everyone, and I mean everyone, can absolutely appreciate.

One of the other levels I played tested my skills with moving the camera around while blazing past sections which have blocks that fall the second players step on them. This level created another pretty challenging moment that I passed with luck on my side. I took a corner and was parallel with the level so that I couldn’t tell if I was going to step off the edge or not. It’s a section that’s intended to be viewed straight on so players can tell whether they are getting close to the edge or not. Instead, I was more worried about the blocks falling out from beneath my feat rather than running off the edge. It worked out in my favor which seemed to impress those in the room that were observing my gameplay. All I could do after that was smile and wait patiently to play the next level. 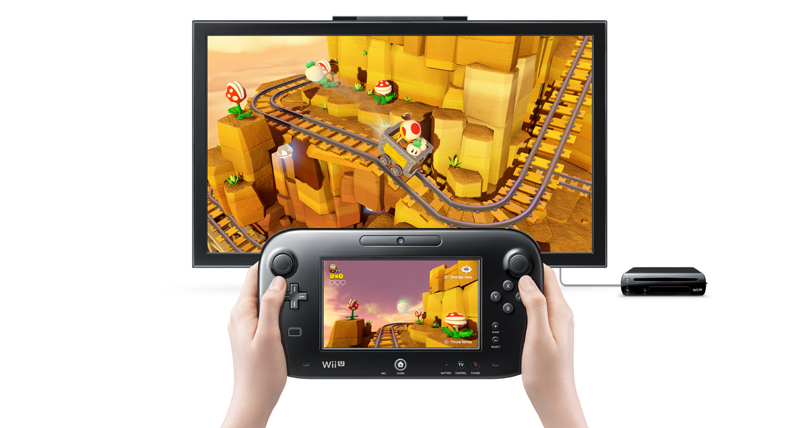 The controls are very solid for easy-going gameplay. The camera can zoom in with the tap of a button so players can get a more up close view of the map. For a majority of the time playing I kept the camera at a distant view. Moving around and performing action moves like throwing sprouts also responds well. The game just simply has a very nice feel that all Nintendo fans would expect from one of their puzzle platformers.

So whether gamers are looking to get past a stage that’s working against them or trying to decipher a puzzle – Pushmo style – really provides them with a natural gameplay experience. Plus it’s not just about completing the stage as there’s also the treasure that must be found.

Crystals are hidden in each stage that can only be collected by discovering them hidden underground or by killing an enemy. Users will also come across stages that have movable blocks that allow them to reach hidden sections.

This brings up the touchscreen function of the Wii U gamepad as players can tap the touchscreen to cause a block to move on the map so they can progress forward in the level. The touchscreen can also be used to tap enemies, rendering them unconscious for a moment long enough to get past the section or toss a sprout at them.

Captain Toad: Treasure Tracker is one of those games that everyone can easily fall in love with and can actually still relax and have an amazing time playing. From the few stages I played, it’s fairly easy going as each level is meant to be fully explored. There is no racing against the clock in this game as it’s simply about getting to the star on the map which ends the stage.

I took my time with each level that I played and had no issues really with difficulty, but it didn’t matter because it was so much fun in a nice and relaxing way. Will it always be like this? I don’t know. But what I do know is that this could easily be one of my favorite games this fall and I can’t wait to play through the full version and discover even more of its charming levels.

Captain Toad: Treasure Tracker has golden potential to be one of the most loved games on the Wii U.