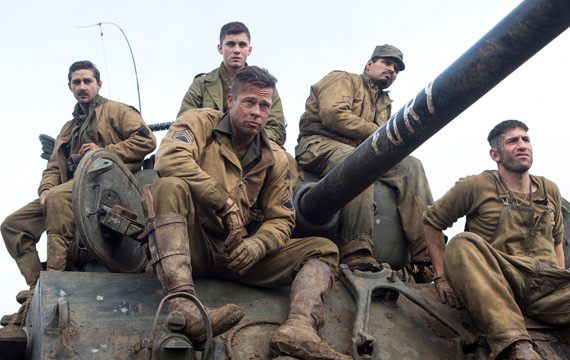 Fury director DAVID AYER spent a fortune seeking out authentic German and allied forces tanks for the film, because he knew there would be experts analyzing every detail.

The filmmaker tracked down tank enthusiasts and museum bosses all over Europe in his search for the perfect armored vehicles that would satisfy the vehicle boffins who would be quick to point out errors.

He tells press, “One of the complaints that you hear with movies about World War II is that the armor is inaccurate. It’s interesting because the film takes place at the end of the war, so you have this sort of mixture of every iteration of the Sherman tank in the film, which is accurate.

“You can try and build tanks but it’s never gonna be correct. There are a lot of guys out there who are fans of the World War II genre; we call them Rivet Towners. They’re gonna look up the foundry marks and serial numbers on the turrets and figure out where each tank actually was because all those records are out there; every bolt, every detail… Is that the right shovel in the shovel slot. Is it the post-war version or the 1951 British export version.

“We worked with several European collectors. It’s interesting working with a collector. We’d ask, ‘Can we paint your tank?’ ‘No’. ‘Can we light it on fire?’ ‘No’. It becomes a challenge, but fortunately we found people who were really game and they let us paint their tanks and modify them and weld on them and get them absolutely correct to April, 1945.

“There are German military vehicles that are insanely expensive and incredibly rare that haven’t been in a movie before, like the Tiger One that’s in the film, which we bought from a tank museum. It was captured by the British military in 1943. It’s a famous vehicle and we were very fortunate to get it. There’s never been a real Tiger in a movie.”