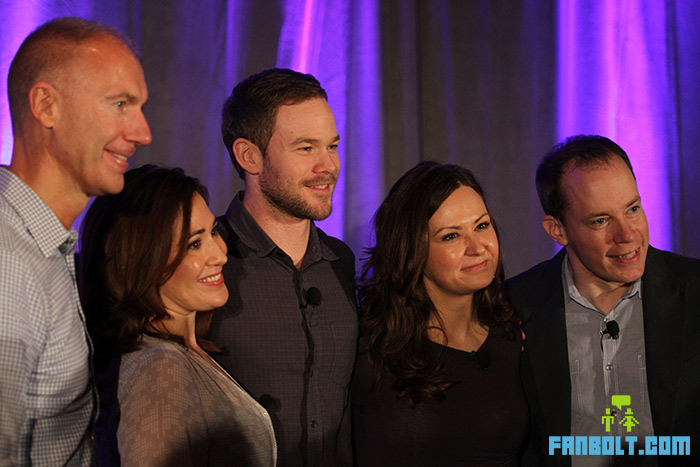 Orphan Black and Lost Girl both have strong female characters. Will Killjoys follow in those footsteps? The answer according to Killjoys executive producer Michelle Lovretta is yes. We had the chance to chat with Lovretta along with series star Aaron Ashmore on that very topic.

“I think that that’s sort of one of the things that I’ve always loved about the genre or science fiction is you get to go places that you don’t normally get to go, obviously, in your life, and sort of experience nothing but endless possibility. But a lot of times, those stories are told through a very similar, confined lens. The protagonist sort of looks the same, sounds the same a little bit,” Lovretta explained. “And for me, while I enjoy watching that stuff, when the world has come out of me, I prefer a character that maybe might have been the sideline of a different show, that I can now see what is their world like, what is their experience like. Often, I have done that through a female.”

Lovretta continued to say that for her that was what was important, focusing on the second families. What is it like when you’ve left that, you’ve made your own new home. For her, it ends up with orphans or space, but it’s trying to see what it’s like to form that unit.

“I think when you put somebody like a Dutch in the middle of that, you’re telling -- I think you’re telling a different story than you would tell if it was sort of a more expected lead. So, I think we are living in an era right now, obviously, or have been enjoying this for quite awhile where we’re getting a lot of strong female protagonists that aren’t just tough, because that’s hot, and I’m all about that, but also are able to just be real and have fun and screw up,” Lovretta continued. ” And I really, really invested in the relationship that Dutch has with John, because it’s platonic. I love the idea of not having a triangle. We have what I would refer to as a relationship triangle in the sense this is a partnership that has now changed and it’s evolving, but it’s not a sexual triangle. It’s not a love triangle. It’s not two brothers fighting over the same girl. They’re fighting over the fact that that is John’s primary partner, he’s earned this, and now the brother is coming in and sort of causing tensions.”

“Stepping on your toes, getting a little bit in your area,” Lovretta laughed. “But the fact is I am really interested in
having these team of equals, between John and Dutch, who happens to be female, but is tough as hell, and what it’s like for the two of them, navigating that relationship without the usual sort of sexual foray, perhaps, which they get with other people.”

Aca-Awesome! 'Pitch Perfect 3’ Is a Go

This Week on Netflix: ‘Heartland’, ‘Danger Mouse’, ‘Wizards vs. Aliens’