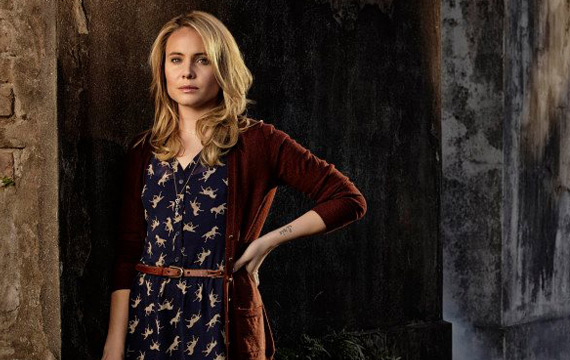 Leah Pipes plays Camille O’Connell on hit CW series The Originals, and the star recently took some time out of her day busy day (which one can only assumed consisted of keeping supernatural creatures grounded) to chat with us about what it’s like playing a human girl in a supernatural world.

Cami’s role in the supernatural community (and how she interacts with characters that could easily kill her) is only part of what makes her such an intriguing character. I think it’s pretty safe to say that you’ll be even more intrigued after reading Leah’s interview… she even teases about the possibility of a new shipper name emerging at some point during the season!

What can you tease about what’s coming up with Cami’s storyline?

Well, it’s difficult being a human girl in a supernatural world, as always. Cami is trying to use what she’s got. She’s got some psychology education, she’s got charm, she’s got, I don’t know, a pretty good wardrobe, I mean you need that!

Yeah, I mean, for a human she’s pretty well equipped to take care of herself in this world!

Yeah! So hopefully, I mean I, we’ll see. She’s gonna get into some deep water, and we’ll see if she can get out of it.

Is there anything coming up for Cami and Klaus? Your fans call you ‘Klamille’ you know.

It’s better than ‘Klami,’ that was the original. It’s not a great, not a great shipper name.

I’m so flattered by that though. It’s one of those things where, when you’re on set during the day you’re like, ‘Is this coming across as something that’s like-is there any chemistry here?’ Because you’re just two buddies, and you’re trying to create that. And I’m SO flattered by the fact that everyone just kind of appreciates that chemistry, but… It’s complicated!

It’s not a straightforward, you know, meet on Match.com and find a soulmate, but there’s definitely a connection there.

Yeah! Camille definitely has a certain effect on Klaus. What do you think is the reason behind that?

I think she has this amazing ability to bring out the human in these supernatural characters, because she’s so vulnerable and open emotionally and really sees the good in them. She believes in them succeeding at being the best version of themselves. Klaus doesn’t have a lot of those people, and a lot of people have given up on Klaus – but Cami and Elijah still believe in Klaus. I think that brings out the best in him…. at least most of the time.

Will we learn more about Cami’s backstory? We still don’t know too much right now.

I know! I know! That’s the thing, it’s like, that backstory is so interesting. You do actually! You will learn a really interesting detail in the next episode, I think, that actually gave me a – it’s one small detail about her relationship with her mom. It’s interesting. It sounds like that’s another complicated relationship she has in life!

There are no shortage of those!

Yeah she has a complicated relationship with her mother, and I don’t know if there’s any other people like that on this show. [Joke!]

You kind of touched on how Cami is the only human girl in this supernatural world, so how long do you think she’ll remain human?

I don’t know. I totally trust the writers, whatever they have in store for Cami, I’m so on board for. I think right now being a human is really interesting, and maybe someday it will be time for Cami to turn into what-have-you, but I like the human right now.

If you could pick what supernatural creature Cami would turn into, which would it be?

I actually, this is impossible, but I like the witches the best. I’d want to be a witch. They have really cute outfits. Elyse [Levesque, who portrayed Genevieve] had the best outfits.

I would love Cami to, yeah, get dark. I think it’s kind of inevitable. I think she’s a little darker now. The fact that she’s willing to manipulate this guy… but I don’t want her to sacrifice her morals. She has such strong morals, and I love that about her character but, you know what? It’s going to be hard to do, and it’ll be interesting! It’ll be interesting if she does end up having to do that, but whatever the writers have in store I’m a huge fan of.

How have you enjoyed filming in Atlanta?

I love Atlanta, I really do! It’s so cold here right now, but it’s beautiful and the leaves change. I’m from California where there’s one season. It’s summer basically all the time. It’s like 80 [degrees] there. I love Piedmont Park. My little sister just got into town and we’re really excited to go get some Fox Brothers BBQ. So the food and the pretty trees, I love Atlanta.

So a question that your fans threw out a lot was whether or not there are plans for a Caroline crossover, and how that would effect you and Klaus. Do you know of any plans of that happening anytime soon? Anything you can say about that?

I don’t know about that. I’m sorry. I wish I had more info for you.

It’s cool! So what’s your favorite part about playing Cami? What about her do you identify with?

My favorite part is the fact that she has such great dialogue with such interesting characters. I love her scenes between her and Davina or Klaus or even the scene with Sebastian [Roché, who portrays Mikeal] where she’s just digging and trying to get to the core of them and remind them that they’re a good person – that they were a good person once. It’s really interesting to have those great dialogue scenes as an actor, and I think it’s interesting for people to watch, or at least I hope it is.

It is! So finally, are there any girl power type scenes coming up with a like a Cami/Davina/Hayley situation?

You have no idea! You have NO idea! It’s like sexy girl power. I mean, things, um, things get… let’s put it this way: Phoebe and I, at the table read, definitely were blushing at some point. (laughs)

I love it! And does it take a lot for you guys to blush at this point?

No, actually it really doesn’t take a lot, but we were blushing. And I think for everyone else to blush… There might be a new shipper name coming your way.

You can catch a new episode of The Originals tonight at at 8pm ET on The CW.

*This interview has been edited and condensed.