Jersey Shore star Nicole Polizzi (who is best known to most as Snooki) married her longtime boyfriend Jionni Lavalle in New Jersey this weekend.

Polizzi and Lavalle exchanged vows at Catholic church St. Rose of Lima in East Hanover yesterday, and shortly after the nuptials, Snooki tweeted a photo of herself in her wedding gown. “Sharing my first photo from my wedding today,” she posted.

“I DO! I’m officially MARRIED to Jionni…” She later added on Twitter.

The newlyweds, both 27, are parents to Lorenzo, two, and daughter Giovanna Marie, who was born just two months ago on September 26th. 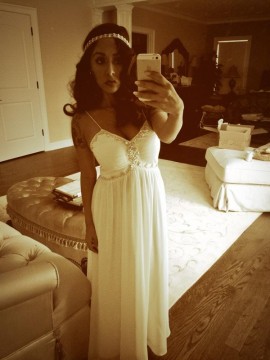 Nicole Polizzi aka 'Snooki' Gets Married in New Jersey