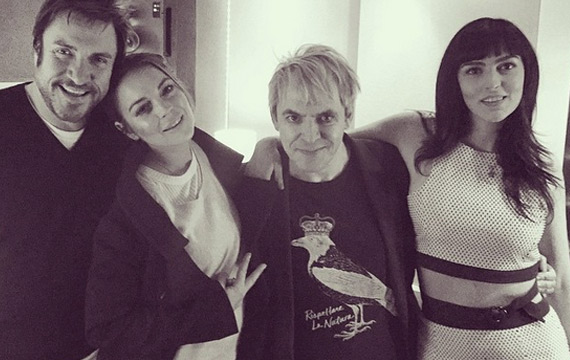 It certainly looks like Lindsay Lohan is planning a musical comeback with a little help from Duran Duran.

The Mean Girls star, who recently wrapped her West End theater debut in London, has revealed she’s collaborating with the 1980s group on a new track.

Lohan has posted a picture of herself and sister Ali in the recording studio with bandmates Simon Le Bon and Nick Rhodes on Twitter and Instagram, adding the caption, “#DuranDuran @aliana recording with some greats!!!”

The pop stars shared the same photo on their Twitter account, with the caption: “Well this shot even surprised HQ! @duranduran, @lindsaylohan, @aliana, #DD14.”

The post has sparked speculation that the track will appear on the group’s forthcoming 14th album, scheduled for release next year. The album will also feature Red Hot Chili Peppers guitarist John Frusciante.

Stephen Hawking Attended 'The Theory of Everything' Premiere