If you look at the past few years you could say it’s a hard life for the Guilty Gear franchise.  After several years of steady releases and updates, and then the drastically different Guilty Gear 2: Overture, the series found itself eventually taking a backseat to Arc System Works’ newer series, BlazBlue. Eventually in 2012 one last update was released for Guilty Gear XX after several years of inactivity, putting the series back on the map. However this would only serve as a taste of what was to come, and for the first time since Overture, a proper new major entry was heading to the series. This is where Guilty Gear Xrd -SIGN- comes into play. Released in Japanese arcades early this year, the home console port finally hit store shelves with a surprisingly small gap between the Japanese and American releases. As the first major fighting game release that this rock music-inspired series has had in years, is this made in fighting game heaven, or does another game bite the dust? 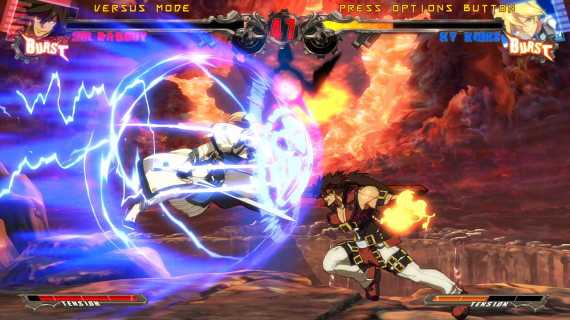 Returning Guilty Gear vets will immediately take notice to a couple of things. First, the roster size is significantly reduced in comparison to Accent Core +R, the last revision of Guilty Gear XX. Second, rather than using sprites, Guilty Gear Xrd gives the series the use of 3D character models for the first time in a fighting game, courtesy of Unreal Engine 3. It is unfortunate that the entire roster isn’t back, but I personally feel they did a great job in selecting characters for this first romp in Guilty Gear‘s new generation. The gameplay diversity among all the fighters, both new and old, is very impressive. Every fighter brings something interesting and unique to the table that another doesn’t, and returning fighters get new moves and tricks into their arsenal that series veterans may enjoy experimenting with. As for Arc and their results with Unreal, the game looks fantastic. The team manages to do a great job keeping the 2D feeling to the game going strong, though they do make use of cinematic camera angles in intro poses, some Overdrive (super) attacks, and the Instant Kill attacks, for example. It’s a welcome change that feels very well executed. Rounding out the presentation side of things, what’s a Guilty Gear game without a good rock soundtrack? Xrd delivers a great choice of tunes to kick butt to, between the new music made for this game as well as some older songs from past games that can be unlocked.

As for the actual gameplay itself, Guilty Gear Xrd is a fast-paced game that definitely isn’t afraid to pull its punches. Much like other Arc System Works fighting game series’ BlazBlue and Persona 4 Arena, Xrd is relatively fast and aggressive. It rewards those who go in to dish out damage and penalize those who take a more defensive approach for too long. For example, you gain meter simply by just moving toward your opponent as a reward (though attacking them also grants you meter like most other games of the genre), but playing too cautiously and safe away over time will potentially slap you a Negative Penalty and strip your meter away. The end result makes for a game with satisfying combat that rewards players willing to take the initiative to go in. Thankfully for newcomers who aren’t really sure where to start learning with this game, Guilty Gear Xrd contains a helpful tutorial that goes over the various mechanics. This is great to help newcomers have some sort of leg to stand on, and is a good starting point. From there the character challenges can offer beginning, intermediate, and advanced techniques for the entire cast, perfect for experimenting with playstyles and seeing who players work best with. In addition, the mission mode offers lessons for how to handle more specific situations than the tutorial mode can offer. With these three modes, there is definitely strong learning potential to those willing to invest time. 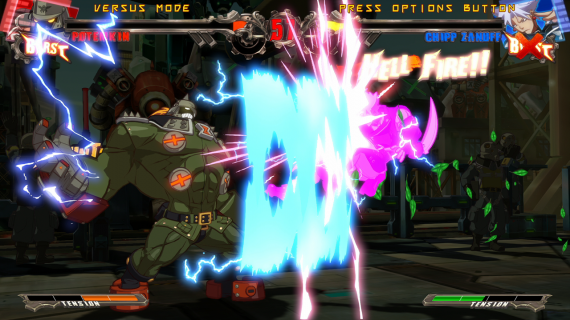 In addition to those modes you also get some of the genre’s usual suspects. An arcade mode, online and offline versus play, training mode, and even a story mode are included. Arcade and story actually have an interesting role in this game compared to most other fighting games, however. The arcade mode helps to kickstart the story, as a little bit of each character’s involvement begins in this mode. This leads right into the story mode, picking up where the arcade resolutions leave off. This may sound like a total far cry from how this genre handles story modes, but there isn’t a single fight to play here. Now hear me out here folks, in my opinion this is actually a good thing. While some fighting games resort to making their own reasons to shoehorn in fights and the story bends around that, Guilty Gear Xrd gets to just tell the story it wants to tell. Returning Guilty Gear fans will most likely enjoy the rather raised stakes this game presents to the current overarching plot. The story here is mostly good, not amazing but a pretty enjoyable ride. It’s a pretty long watch, but the game allows you to save your progress at the end of every chapter. You can even save mid-chapter, too, and return exactly where you left off. Grab some popcorn and a soda for this one if you wish. 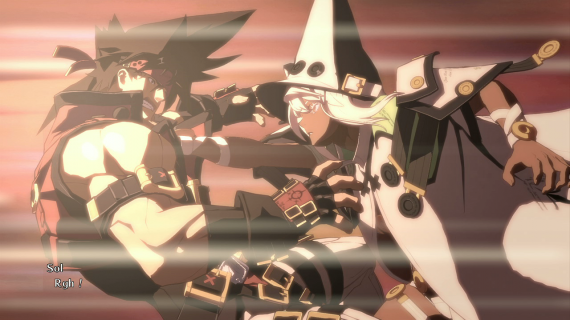 The online mode works a little more unorthodox in Xrd than in some of ASW’s other more recent fighting games. Rather than choosing which mode to jump into online from the main menu between either the large multiplayer lobbies, private smaller rooms with friends, or ranked matches with random strangers to elevate yourself on the leaderboards, the large lobby serves as the main online hub in this game. You pick a lobby based on geographic regions (you can change which lobby to join at any time later as well if you choose). While you can interact with players in there, players can choose from here if they wish to host their own unranked rooms with friends or join ranked fights. Just treat the lobby mode as the online menu itself and players should be able to adjust easily. To help prevent any potential separation of players based on what system they own, both PlayStation 4 and PlayStation 3 consoles can play online together, though the games do have options to toggle that can make it so they can only play with others on their respective hardware if they so choose. There’s also the return of the M.O.M. mode, which has been revamped in this title. While M.O.M. is an offline mode, you can take your customized fighters from this mode and bring them online to fight friends. The mode itself has you fighting various buffed and debuffed opponents on a grid, depleting their multiple lifebars, picking up Medals they drop, and obtaining and using powerups dropped from opponents or purchased with Medals.

Things aren’t all in good company with this game, however. There are a couple of issues that feel like a misfire with the overall product in my opinion. For starters, unlike some other fighting games, there’s no survival mode present here. This is especially disappointing given how the series has had the mode before. M.O.M. mode retains the customized character aspects of +R‘s survival mode, BlazBlue‘s Abyss mode, and Persona 4 Arena Ultimax‘s Golden Arena, but there isn’t much of a penalty for losing here other than your current win streak. No proper survival mode feels like a missed opportunity personally. My other issue with the game, though not too major, is the Danger Time mechanic. The game has a random chance when attacks clash to trigger this special state. In Danger Time, attacks dish out more damage and increased hitstun, allowing for more powerful combos for 10 seconds between both players. It’s an interesting idea, but there’s no guarantee when it’ll happen, since most attack clashes don’t trigger this state. The fact it’s based on random probability seems like a huge gamble, and the momentum of a match can shift easily due to this showing up sometimes. It’s not terrible by any means, though I just wish it wasn’t left up to probability. If it was under certain specific but strict conditions then I’d have absolutely no issue with it. 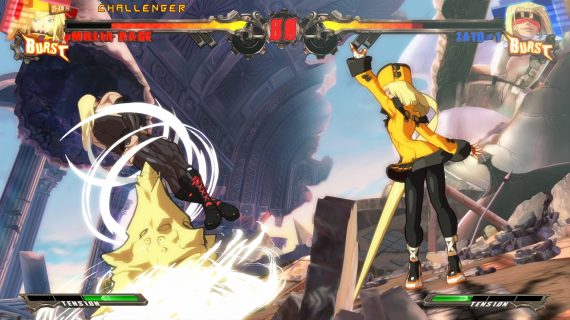 Overall, Guilty Gear Xrd -SIGN- is a rocking experience. The game looks fantastic with the switch to 3D models and the gameplay is an absolute blast. The music, very much a series trademark, still holds up well with the new pieces made for this game. The roster is smaller this time around, but to start a newer, more accessible generation for the series, this is something I’m totally fine with. Having a fighting game that doesn’t need to write excuses to have fights into the plot and just have it tell its own story instead is a refreshing change of pace. The lack of survival mode and the randomness of Danger Time are only a couple small, sour notes, in an otherwise excellent composition. Guilty Gear Xrd -SIGN- is most definitely worth the price to play the game.