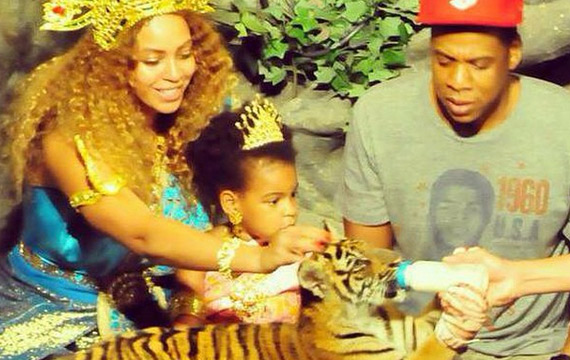 Beyonce has been blasted by animal welfare campaigners for posing with a baby tiger during a family vacation in Thailand.

The superstar has been pictured petting the animal in a photo with her husband Jay-Z and daughter Blue Ivy during their recent break in Phuket, Thailand.

However, the snap has sparked fury among animal rights campaigners, who accuse Beyonce of promoting a “sordid side of tourism”.

A spokesperson for the World Animal Protection charity, Dr Jan Schmidt-Burbach, says, “A tiger is not a play thing. Their health and well-being should not be sacrificed for a photo opportunity… Holiday snaps like these support an industry that relies on animal cruelty… The tigers used for these photos are often crammed into tiny cages or chained to the floor for long periods.

“They are also forcibly removed from their mothers to be fed artificially by tourists. All in all a far cry from their natural lives in the wild. But this sordid side of tourism is conveniently hidden from public view.”

Beyonce is no stranger to animal controversy – she has previously been criticized for wearing fur and toting accessories made from exotic animal skins such as anaconda, ostrich and crocodile.