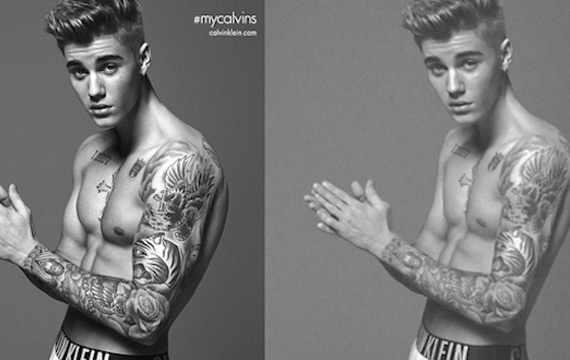 Not long after those altered photos surfaced from Justin Bieber’s Calvin Klein photoshoot, Bieber threatened to sue the bosses of the website that posted the images. The website of course claimed that the images released were the un-airbrushed and un-enhanced original images.

Bieber joined the advertising campaign and posed in his underwear for a series of photos that were unveiled last week, but further images were subsequently leaked online showing a much less bulky Bieber.

The snaps show the pop star with a much smaller chest and back, thinner arms and legs, a barely-there butt and a dramatically reduced bulge, but Bieber is adamant the original photos have not been tampered with.

In a letter obtained by TMZ.com, his team threatens bosses of breatheheavy.com with legal action for posting the pictures, which they insist are fake.

They asked for the website owners to remove the photos.

Bosses of the website have offered Bieber an apology. The photos have now been removed from the site and editors issued a statement on the site which reads, “We sincerely apologize to Bieber for the hit to his ego and to the millions of tweens on social media we upset…”

Lena Dunham Cuts Back on Social Media Due to Cyberbullying