FanBolt recently had the chance to take the awesome inaugural Girl on Fire Tour presented by Atlanta Movie Tours, and this journey is one that fans shouldn’t miss!

“While our Atlanta Film Sites tour features locations from hundreds of Georgia filmed movies and television shows, we felt a franchise as bold and as popular as The Hunger Games deserved its own special tour. We’re looking forward to revealing the exciting filming locations in and around Atlanta,” stated Atlanta Movie Tours’ Co-founder Carrie Sagel Burns about the new tour that we were fortunate enough to preview.

The day we set out for our 3-hour tour (sing with me: a 3 hour tooouuuur) was a gloomy one, but oddly befitting for the subject matter of the day. We were going to retrace the steps of the Mockingjay herself Katniss Everdeen, and the rain and clouds in the sky only helped create a more Panem-like atmosphere. 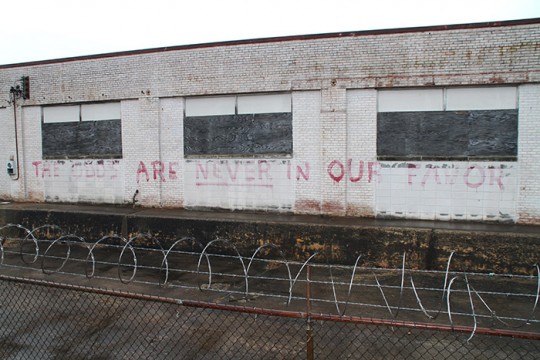 The trip took us all around Atlanta, from Adair Park, where we got to see the dilapidated buildings that became District 11 as well as a pretty cool leftover message from the film scrawled across a building wall, to The Goat Farm, where we literally retraced Katniss’ District 12 steps and found some leftover prop coal from the film. We also stopped by the Marriott Marquis, home of Johanna’s famous elevator scene and finally, had the opportunity to tour the Swan House, or as you may know it President Snow’s beautifully haunting mansion (we even snuck some pictures in old Snow’s office, but don’t tell him! We don’t want Peacekeepers on our backs).

While on a tour, an equally important part of the experience – aside from the destinations – is the guide. We were lucky enough to have Kathryn Telford usher us along our journey, and she was just as friendly and knowledgeable as any first-time touree could hope for (Yeah, I said it… this was my first movie tour EVER!). Our time on the bus between stops was filled with fun facts about the film, trivia games for the guests (with prizes!) and movie clips to help us identify what locations coincided with what scenes.

All-in-all the tour was a blast, and we’d definitely recommend it. The rain only helped put you more in the mood of the films (but if your luck isn’t as good as ours and you happen to book on a beautiful, sunshine-y day don’t beat yourself up). It’s great for fans of the series and if you’re a resident, it’s also a cool way to see some parts of the city you may not have been privy to beforehand.

Check out our gallery of some of snaps from the Girl on Fire Tour and some fun trivia we learned below:

Fun Facts from the Girl on Fire Tour

The Atlanta Movie Tours Girl on Fire Tour begins February 8th. Pricing for the tour is $65 for 3 hours and includes trivia games to test your knowledge, onboard video screens to view every tour location in action, complimentary bottled water, and a group photo which is emailed to guests after the tour. Be sure to go to AtlantaMovieTours.com to book and may the odds be ever in your favor!