Lara Croft is back in a top-down twin-stick shootin’ adventure. Lara Croft and the Temple of Osiris is the sequel to a game I stumbled across late in its release, Lara Croft and the Guardian of Light. Once again, like the previous title, it’s full of puzzles to overcome while exploring an ancient temple.

I love the set-up of both Lara Croft titles as the top-down adventure can be quite enjoyable when it comes to solving puzzles and leaping across from platform to platform. There are plenty of areas that require good timing, quickness, and plenty of thought. Lara Croft and the Temple of Osiris also provides gamers with a new component to the gameplay which is a staff that controls elements such as platforms and the timing of bombs. Both of these elements are used quite well in solving puzzles throughout the many tombs.

Lara Croft and the Temple of Osiris isn’t overly difficult though it does have those moments were players may accidently jump through poison that instantly kills them or they get too close to spears that also kill on contact. There rarely have been times where actual enemies have poised much of a challenge. So, for the most part, the game can feel pretty casual for players to make their way through. 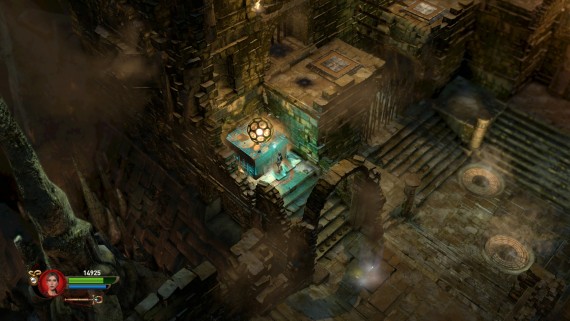 However, as players near the end of the game, situations do escalate in difficulty as one of the tougher bosses features flooring that can kill almost instantly. So players not only have to worry about the boss attacking, but they must also be aware of what they’re standing on. Making it more difficult, additional enemies come stumbling in as the fight goes on. So there are multiple enemies to kill and avoid all while trying to stay focused on changing ground conditions. That’s easily one of the toughest moments in the game.

For the most part, even though the difficulty may not seem the hardest at times, it’s still quite an enjoyable experience. I actually like the simpler jaunting through each area. And even though I’m in situations where I’m running across ground that’s falling all around me, I still know that I’ll easily get through it without having much care. But, thankfully, it still ends up being entertaining enough to appreciate.

I must say that I have been wondering lately if I might be turning into too casual of a gamer where I appreciate an easier progression in games. 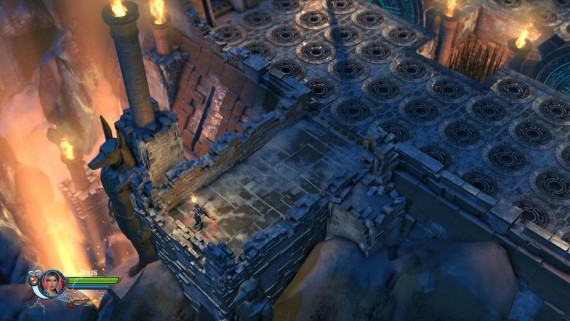 But as I mentioned before, just because a lot of the game seems pretty easy going, that doesn’t mean that challenges are present in Lara Croft and the Temple of Osiris. Players who want to be given more difficulty can certainly have it as there are multiple challenges listed at the beginning of each tomb for players to accomplish. This includes doing such tasks as avoiding taking damage from a specific element that a boss throws at the player or by defeating a boss in a specific amount of time or less. I haven’t been able to accomplish too many of those in my casual play through, so they are quite difficult.

Lara Croft and the Temple of Osiris certainly has enough for everyone to enjoy, both casual and hardcore. However, I think those who are looking for a more laid back time and appreciate some twin-stick shooting and puzzle solving gameplay will be the ones who appreciate this adventure the most.

Check out some gameplay footage below!