Grey Goo is a real-time strategy (RTS) game that simply reminds me most of StarCraft. I must admit that I’m not the best or the quickest when it comes to setting up shop in any real-time strategy title, and Grey Goo certainly put me right back on the spot where I quickly had to develop factories, troops, and defensive walls so I could stop the approaching enemy and prepare for my own advance.

I always appreciate the strategy of games in this genre and the creation of an army that’s used to remove the enemy threat. As I mentioned already, my weakness is my quickness and it’s something I must work on because I always take my time advancing out and taking possession of additional land and resources. This is also why I don’t dare play any of these games online because I’m always surrounded immediately.

This should be obvious, but having as many resources as possible is incredibly important in Grey Goo. Here I am going through the game on Easy and I’m still failing missions, which included a mission early on where players first meet the Goo. Frak you, mother Goo!

It’s the fourth mission in the single player campaign where players first meet the Goo, and it’s a time-based mission. Because of that, it’s important for me to create my military and advance it across the map as soon as possible before time runs out so I can hopefully rescue survivors. I’ve played a lot of Starcraft II (campaign) recently, but I’m still as slow as a turtle. Because of that I’ve actually failed this mission three times before successfully moving on. And I must say that it didn’t feel much like a success (see video above).

Granted, I was still figuring out the game and getting comfortable with it. So struggling early on should almost be expected. Also, I did advance further every time I played the 4th mission as I was able to set up my defenses and secure additional resources faster each time. Not being a hardcore real-time strategy guy, it’s obvious that I just needed a little extra time to familiarize myself with the workings of this game and experiencing what I can and cannot get away with.

But even with my early struggles with Grey Goo, It’s been a very interesting experience as I push further on into the campaign and experience more that it has to offer. The characters, story, and presentation is very intriguing so far, and the game also looks gorgeous too! I’ve been able to get away with 2715×1527 DSR using the EVGA GeForce GTX 960 SSC on max settings. DSR makes a great difference in this title as you can see in the image below. 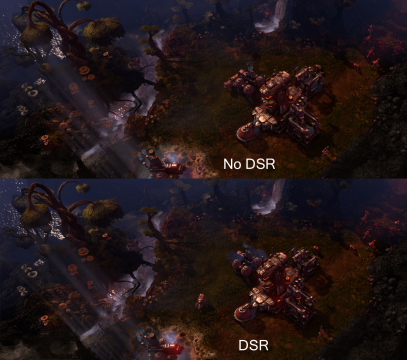 So even though it’s taking me some time to once again get familiar with the strategic gameplay of an RTS, I really like what I’ve seen from Grey Goo so far. Plus, who doesn’t like the name Grey Goo? It’s Goo’d Stuff!