If video games have taught me anything, the concept of “big game hunting” is subjective. Some games give you the promise of deer and bears, but Monster Hunter raises the stakes with scaly large lizards, giant spiders, huge beasts, and even wyverns and dragons. Teaming up with fellow hunters to take down these large-scale monsters is what makes the Monster Hunter series famous, and the newest in the series finally makes its way out of Japan. While we never got the base version of this game, Capcom brought out the upgraded Monster Hunter 4 Ultimate for the international release. Was Ultimate worth the wait for aspiring hunters?

As soon as you start Monster Hunter 4 Ultimate, you’re presented with the character creator menu. You pick the appearance of your hunter and their Palico companion, then you get thrown into the action immediately. You start off sailing on a caravan under the supervision of the aptly-named Caravaneer. Armed only with cannons and a gong, your task is to defend the roaming caravan from a surprise attack from a massive creature known as the Dah’ren Mohran. Once you drive the creature off, the caravan makes its stop at Val Habar, the first of several hub locations in the game. After the intense introduction, this is where the game starts to unfold into the big picture.

At first you’ll be given simple missions such as harvesting a certain amount of a material out in the field or killing a certain amount of smaller monsters, among other tasks. For players uncertain on what weapons to use for the road ahead, these missions make good chance to test things out, hopefully finding one that fits your groove. Coming from the demo myself, I’ve been rather fond of the Switch Axe weapon, but Monster Hunter 4 Ultimate has plenty of variety between melee and ranged weapons. Two new weapons join the armory in this installment, the Insect Glaive (which has you controlling a bug-ally cleverly named the Kinsect) and the Charge Blade (A weapon that starts you in sword and shield mode to charge energy, then allowing you to unleash devastating strength in axe mode), so returning hunters have some new toys to mess around with. Once players have proven their worth with these small intro missions, challenging missions to hunt bigger game start to open up. This is where the fun of Monster Hunter 4 Ultimate truly begins. Many of these fights have a great sense of tension and challenge to them, and personally that’s something I really enjoy in games. They require a good amount of work to take down, and you need to be on top of the situation by dodging vicious strikes while trying to lead them to places you can jump off of to mount them. For those who like games that are a little more on the difficult side, Monster Hunter 4 Ultimate has you covered with increasingly difficult large hunts.

However, a good hunt needs more than just a weapon you’re comfortable with, it also takes preparation. Making sure you have a weapon that can do adequate damage, compatible armor for protection, as well as your own supplies for sustaining yourself is vital. In killing smaller monsters you can harvest bones, fangs, pelts, all sorts of things that you can use to craft new weapons and armor, or to upgrade your existing weapons. Eventually you can earn talismans and add decorations to your armor, which can offer additional properties. These factor even more into the pre-hunt preparation. It’s one thing to go with the highest defensive stats, but given each armor’s different elemental resistances this may not always be the most wise course of action.

It’s important to properly prepare yourself and to come in with your most comfortable weapon for situations against these big monsters which are an absolute blast to go toe-to-claw with!

Once you secure the kill on these special creatures, you can harvest all sorts of materials from them. These specifically are much better than what you can find in the smaller prey, and it allows you to make specialized equipment and weapons. I’d have to say my favorite fight was against the Nerscylla, for an early fight it did a fantastic job of keeping me on my toes between it’s acrobatic web-based movement and its multitude of status effects it can dish out.

You can engage these large creatures on your own, but it’s always best to get backup from time to time. Monster Hunter 4 Ultimate has a few options to offer for hunters who wouldn’t mind some backup. The game allows for co-op support in both local and online multiplayer settings. If you’d rather play as a one-person party, or if there’s no internet to connect to, you can bring along your Palico to help. Palicos are felines with combat attitude, and while you only start with the one you’ve created alongside your hunter, you can eventually unlock others as you play through the game. A Palico’s enthusiasm gauge does need to replenish from time to time, so don’t be afraid to leave your buddy behind to rest. The higher its enthusiasm is, the more reliable in combat it will be. Much like for your own hunter, you can forge equipment for Palicos if you find the scraps to do so. 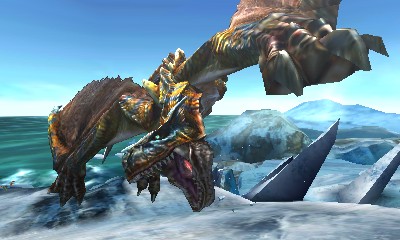 Sometimes, however, it’s best to just throw caution to the wind and go on an expedition. Once you unlock expeditions, going on one will place you in a new, map-less area with the ability to keep jumping back in no matter how many times you faint. That said, it’s best to try to be quick since the monsters here can escape in some instances. Anything can possibly show up along the way, adding a bit of unpredictability to the formula. Going on my first expedition was one of my favorite moments, the very idea of you and your own wits against whatever lies ahead can serve a good test of what you’re capable of. The first one may not have been too tough, but I can’t say the same for subsequent trips.

The biggest issue with the game is one that only exists because of the hardware it’s running on: the camera control. If you’re gaming on a standard 3DS, you can use the Circle Pad Pro attachment to give you a second analog stick for the camera. In addition, the New Nintendo 3DS hardware, such as the New Nintendo 3DS XL bundle with this game included, can use its built-in second analog stick to rotate the camera with no attachments needed.

For those with a normal 3DS and no access to a Circle Pad Pro, or if you’re playing on a 2DS, these options aren’t available to you, but Capcom has included several methods to control the camera to try and make the most of the situation. As the analog slider is used for movement, the Dpad underneath it can spin the camera around. The touchscreen also has a virtual Dpad on the right side that you can use with your right thumb and spin the camera that way.

Also available is somewhat of a camera lock-on function, using this will allow you to put somewhat of a lock on the big game you’re hunting, so you can quickly tap the L button to spin the camera towards it if it runs off of the screen past you. If the lock-on isn’t engaged, a quick tap of the L button spins the camera right behind you. In short there are quite a few options to work with the camera on older hardware, but it is a little awkward and will take some getting used to.

Monster Hunter 4 Ultimate has the pick-up-and-play mission structure of the hunts down to a science. A game like this with its missions is perfect for taking on the go, and meeting up with people who have the game can end up potentially getting you some new hunting allies. If one doesn’t have that many local players, the online route makes hunting with friends just a few clicks away. The large-scale monsters all pose a thrilling challenge to fight against, making each an enjoyable experience for those seeking a challenge. When all is said and done, this is big game hunting at some of its finest.