Interstellar Marines, which is currently in early access form, is available for players to try out for free this week only on Steam. It’s also discounted at 66% off for those who want to make the purchase before the free week comes to an end.

Interstellar Marines is a game I’ve had some previous experience with as its description caught my attention. An old-school tactical first-person shooter that is inspired by Half-Life and Rainbow Six, you’ve got to like that! However, that doesn’t quite describe the experience I got when I last played the game a few months back.

Interstellar Marines features single player, versus, and co-op gameplay and puts players in a believable future that aims to combine sci-fi with military realism. Again, more language that speaks perfectly to me.

In the early days of trying out this Early Access title I began with multiplayer gameplay that has a very unique atmosphere. There are changing environments and platforms, so what’s there one minute may not be there the next. Also, it can become very dark very quickly. This is where stealth and silence is key with movement.

I also remember the gameplay to be very natural with movements and combat. And what makes the multiplayer even more interesting is that players cannot respawn once they’ve been killed. They must wait for a teammate to capture one of 8 points or kill an enemy combatant. Players certainly need to be careful and aware of their surroundings at all times. Teamwork is also very important for capturing and defending key points. 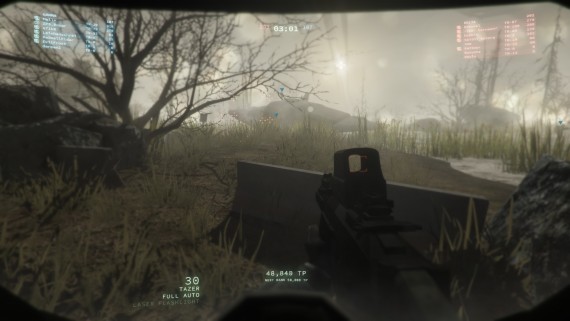 But let me get in to what I mean by scaring players for free all week. Single player and co-op modes have become available over the past few months and it’s actually quite the frightening experience. What captures this sense most of all is playing in nearly pitch black surroundings. Also, being able to hear the threat but not able to see it. Of course, players have flashlights to see, but the atmosphere is still very intense to engage in.

This enemy threat are robots, similar to what people may have seen with I, Robot. Now, some may wonder how robots can be scary, but it’s the entire atmosphere that’s created for both single player and co-op gameplay that sets the tone. It’s really a unique experience that gamers should check out.

This week was chosen for a reason to feature the Interstellar Marines free week. It comes right as the latest updates have been made to the game. I’ll definitely return to action this week as well just to experience all the new additions and changes that were made. Make sure to check out the Steam page for a full list of updates and to download the game. It’s well worth looking into. Just try not to jump when the robot comes out from the darkness and starts hitting you from behind! Don’t worry too much about that happening though as players can usually hear the direction they approach from. Usually…