RIVE is an upcoming 2D twin-stick shooter from Two Tribes that features platforming elements, hacking capabilities, and plenty of gunfire! I recently played a short, single-stage demo to get an idea of what this title may offer and I’m quite happy I did.

I always find myself enjoying twin-stick shooters, so it’s no surprise that I’ve become thrilled by this title. The gameplay in the brief demo is very fluid and can be played cautiously or with speed. However, the faster it’s played, the better a player’s score will be. But playing a speed game also increases the difficulty. This made the demo challenging for obtaining a higher score as I have to move quickly and keep up the multiplier without getting hit.

The few enemy types seen are nice foes to do battle with. There are a few enemies that come streaking at the player once they get within range, so it’s important for the player to shoot them before they impact them. But hacking is a feature that I really appreciate and can’t wait to see how much further it goes in future levels.

I really wasn’t expecting to be this excited about RIVE, especially since it’s just a single level that I played. A twin-stick shooter is just another twin-stick shooter, right? Well, of course not, but it certainly takes a lot for a title in the genre to stand out far more than others. RIVE already does this for me with its colorful visual style and engaging gameplay. It already has a special quality, even in just this short demo, and that’s all it took to fully capture my attention and fill me with excitement!

Obviously I’m excited about the game. So, to learn more about it, I decided to ask Collin van Ginkel, co-founder of Two Tribes, a few questions to gather even more details.

Andrew Stevens: What’s the inspiration behind the game? This is your first shooter, correct?
Collin van Ginkel: It is, although when we started all the way back in 2000 on Game Boy Color our first prototype was a Gradius style shooter with a dragon! I’ve always been interested in shooters, especially the ones from the nineties. I wanted to make the game 90’s designers would’ve made if technology didn’t restrict them, and I think RIVE is very close to that!

Andrew: What past shooters have inspired you in the creation of RIVE?
Collin: Megaman, Gradius and Metal Slug often come up in our design discussions. I guess we’re making something of a hybrid of these games.

Andrew: How much more hacking can we expect and how much does it further affect gameplay? The demo lets us hack a door, a health bot, and an enemy bot to advance upward at the end. Does hacking become even more engaging in future levels?
Collin: We’ll have a bunch of different hacks, some more useful than others. We’ll let players replay sections when they acquire more hacks to allow them to change their strategy and/or route through the level. Every time we add something to the game we think: ‘what would be fun to do with our hacking mechanic’, so it keeps on growing until we ship it. 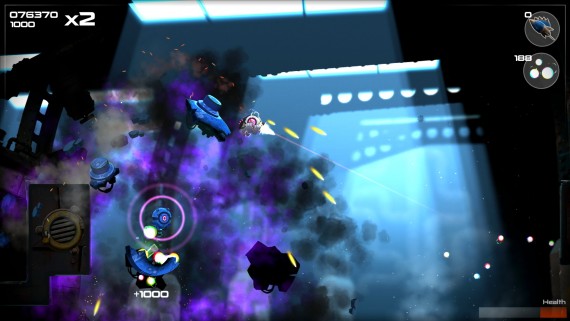 Andrew: Are there upgradable guns in the future missions or is it always going to be the one main gun with secondary weapons like EMPs and missiles?
Collin: For now we’ve supercharged the main gun to be destructive and fun from the start, so we haven’t planned any upgrades for that. Our secondary weapons like the EMP and homing missile can be found throughout the levels and you can stockpile them if you want.

Andrew: I read that half of the levels in RIVE will move from right to left? Is that an attempt to disorient players a bit who are more familiar with the left to right gameplay or does it play a more important role in the development of those stages?
Collin: We want to keep introducing new stuff at a rapid pace in RIVE and playing with direction is one of the tools we have at our disposal. The game world has been designed with a shaft in the center where you return to after each mission. So it made sense to have levels moving in both directions. But there will be missions where you move up or down most of the time as well.

Andrew: How do the levels differ in the game? The preview level is a platforming type of level, but in the recent trailer it looks like there is a space shooter type level as well.
Collin: We’ve got a bunch of environments each with their own special gameplay. Sometimes there will be gravity, a lot of water, total darkness. We want every level to feel fresh, but the core focus will always be on the shooting action.

Andrew: By playing RIVE, players will have rocks fall on their heads and be hit by fast moving trains. What’s up with this and what other dangers can we expect? 🙂
Collin: We found out that there’s fun in failure in RIVE. You can always avoid death, but it is a regular occurrence and people love it when it happens!

Thank you, Collin, for taking the time to answer my questions! 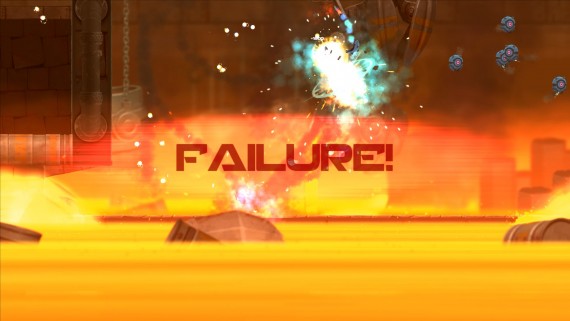 I don’t know if it’s the fact that I get to eat hamburgers to regenerate health or the ability to hack systems to take control over bots, but I certainly have a good feeling about RIVE. Again, this is based on a short 4-6 minute demo, but because of that experience and what we’ve learned about the future of the game, I really hope that its unique quality continues to shine throughout the entirety of the game.

RIVE should absolutely be on the radar of shooter fans. It doesn’t have an official release date just yet, but hopefully sometime in 2015. Check out the latest trailer for the game.