Powers is the first scripted original series premiering on the Playstation Network and, as most of you may know, is based on the comic book series of the same name.

Actor Sharlto Copley has been tapped to play the series’ star Christian Walker, a homicide detective who, along with his partner Deena Pilgrim (Susan Heyward), investigate crimes involving people with extraordinary abilities. The catch? In their world, being born with some sort of power is pretty commonplace, and Christian himself even had a power, but lost his abilities.

It’s interesting to explore a world where humans being born with powers isn’t automatically feared or frowned upon, actually the complete opposite, a notable difference that Copley admitted has been interesting to portray. “The idea that powers – some form of superpower is as prevalent as it is in this world, that there’s a lot of people that have marginal powers. You know, you got a guy who levitates a little bit off the ground. Or you might have someone who can breathe a little bit of fire. Or somebody, you know, that can freeze a little bit of something if it’s really close to him. It’s – these are things that on the one hand you sort of say, well, what do you do with that?”

The universe that Powers takes place in may not be too different from what we experience in everyday life, however. “I think going deeper than that in the series and again speaking to the kind of social commentary aspect, the metaphors and the form, the obsession with powers to a certain degree is the obsession with power. With actual power in one’s own life. Metaphorically, that was very much how I saw it. And I think what the series has something to say about. So yes, you know, people are obsessed with powers. On the surface, that’s all, yeah, I wish I could levitate or wish I could freeze things or wish whatever.

“But it’s really just you’re special. You know, you have some power in the world. Look, people are looking at you and they think you’re special. You just have to look at Facebook or Twitter whatever to see that our society more than it’s ever been probably in its history is reaching that point of people’s desperation of like please notice me, notice me. You know, I’m special. You know on Facebook, I’m my own magazine. Here I am. I’m important. I’m something. Look at me. I’m funny. I’m interesting…this show for me is very much a metaphor of that. It’s very much going: look how obsessed people are with power, with being noticed, with being special.” 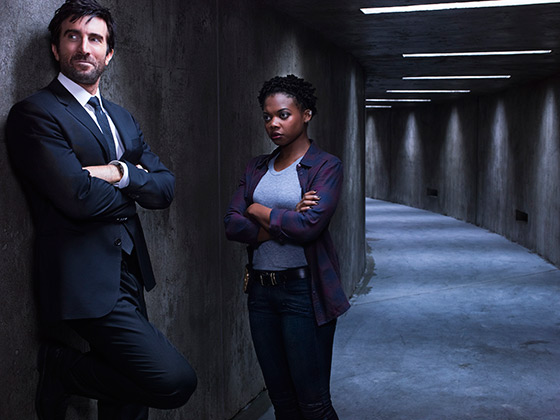 Another major aspect of the show is Christian’s relationship with his partner Deena. “The relationship between Christian and Deena is very, very critical to I think what makes the show interesting to watch, said Copley. “You know, that was one of the things I was very relieved about watching the first table read that I had with Susan Heyward who plays Deena. We just kind of had a connection straightaway. We had kind of personally like a real, a kind of heart connection and got on really well.”

“Christian knows about powers. He was in that world for a long time. He knows about superheroes. He has a lot of experience being practically in fighting them and dealing with them. In reading situations involving them and understanding how they think, and understanding the limitations of certain people’s powers. He’s one of the best people at having that information.” Copley continued.

When it comes to Deena, however, it sounds like there could be a little opposition and the two will have to find some common ground in order to get any work done. “[Christian’s] also used to doing whatever he likes. And being sort of alone to himself. And not really having to listen to people. Kind of – you know, certainly not fill out paperwork and that sort of thing. It’s just so – now you have, you know, Deena who’s tried to be this sort of by-the-book cop and very focused on detail, and very focused on following the rules. And doesn’t have the same level of ego that Christian, you know, being a former rock star has.” Copley explained. “And so that creates a very interesting situation where they both have skills that are practically useful in solving crimes. And, you know, being able to – she’s looking at details, making calculations, what, you know, what might have happened. As a detective, he’s looking at, you know, how powers behave. And what powers, you know, what the limitations are here? Or what the likelihood of this power behaving in this way. That’s all very useful to police work.

“But then the two personalities clash, you know, quite considerably in the sense that Christian is way more kind of self-centered and pretty much wants to do what he wants to do. And Deena’s more out for trying to like… “We should be working as a team here” and Christian is not so much of a team player.”

Sounds like it’ll be interesting watching how these two work together.

Powers will launch three episodes on the PlayStation Store on March 10. Subsequent episodes will be available weekly. The first episode will be free to everyone, and the entire season is free to PlayStation Plus subscribers.

Let us know if you’re excited about the series in the comments below! And keep checking back with FanBolt closer to the premiere for details on our visit to the Powers set last November!