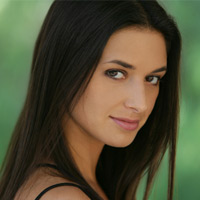 I had the pleasure of chatting with Andrea Gabriel who plays Nadia on ABC’s Lost. The charming actress talks with us about her Lost memories, the question she most wants answered from the series, and what’s next for her! Check it out below!

Your first appearance in Lost was very early on – had you seen any of the show when you auditioned, or had a chance to really form an opinion about the material before you went in to audition?

Andrea Gabriel: No. [Laughs] I remember when I got the audition, and there was a lot of buzz about the show. I think only the pilot had aired at that point. So I went into the audition, and I really didn’t know much – I knew they were on an island and that people were really into the show. I went in and got the job, and then that weekend I had a little cold – so I stayed home and they reshowed the pilot. So that’s when I freaked out and was like “this is so good!” I only got to see one before I left, and when I came home that’s when I saw ‘Walkabout’. Then I was really freaking out, because I knew my episode was going to come, and I already knew the characters.

Did you keep up with the show after your appearances?

Andrea Gabriel: Oh yes. Absolutely. [Laughs] I can’t say that it was all completely unbiased. I was like ‘I could show up with the Others’. [Laughs] Now it makes complete sense that I didn’t. No, I’ve been enjoying the show since it started – and I have no theories though. I have the same ones as everyone else. I have no greater perspective.

What would the perfect ending be to Sayid and Nadia’s story in your mind?

Andrea Gabriel: Oh… the perfect ending? Well first of all, I’d have a pulse. That’d be a good start. [Laughs] And he’d have a pulse. He’s got to be alright… This is a hard question, because I don’t know how it would be possible.

The way they brought back this season – with the parallel ‘what if’ the plane had landed storylines- We don’t really know if what has actually happened could possibly be undone. Maybe your character wouldn’t have to die?

Andrea Gabriel: That’s true. I think my fantasy would be at the end of the day – we’d both just get to be on another island. We’d be on the resort side. [Laughs] Just hang out there for eternity. I’ll put plenty of zinc oxcide on my scars – we’ll be fine.

What’s the one question you’re most hoping that series answers?

Andrea Gabriel: I have so many! I’m hoping… wow that’s a really good question. It’s funny when I start to talk about Lost I smell something burning, and it’s usually my brain. I think the question I want to have answered is – does this happen often? With these people – is there something very special about them… about Jacob? Or is the idea that this happens all the time? I guess that would be my question.

What’s been your favorite experience on Lost?

Andrea Gabriel: It would have to be the very first time I went out there. I had no idea what to expect. When you’re a guest star, you kinda feel like you have to prove something. Everyone else is on the show and has started establishing relationships. And you’re just hoping that they’re happy you were cast. [Laughs] When I went out there, it is kind of a long story, but because of scheduling conflicts I didn’t know what night I would be leaving and I wasn’t packed. I had so many loose ends to tie up. When you know you’re going in 2 days, it’s a lot easier. But this was the same day, so I took the red-eye out there – and by the time I got there I was feeling kinda nauseous. [Laughs]. I think it was just everything combined and the flying. By the time I got there, I just let all of that go – the ‘I’ve gotta prove something’. My whole thing was just don’t pass out – don’t get sick infront of everyone. But really everything melted so fast. They were just so friendly, and Naveen (Andrews) was like a scene partner from acting class. It was just so comfortable – it was almost magical that all of that worry just disappeared. It was just natural – and I think, first time out of the gate, I was maybe able to do a better job, because I wasn’t as self-concious.

Do you ever get recognized by Lost fans?

Andrea Gabriel: No, because I’m so different than the character. But this season, I think because they did the clip show. People will say ‘Oh, you look so familiar to me’. They think they went to high school with me or something. If I’m lucky, I’ll be with a friend who mentions it – otherwise you’re just like ‘oh, I don’t know’. [Laughs] But sometimes I do get recognized and I get very tickeled by it. It’s still a very early thing. It’s a brand new sensation.

What has the vibe been like on set during this final season?

Andrea Gabriel: I get the feeling that people are happy, because they’ve done such a good job – they couldn’t have done better. It kinda feels like senior year. [Laughs] I think there is a little bit of wistfuliness. Everyone is very much in love with everyone else – the crew… the cast. It does – it feels exactly like senior year. You’re kinda bummed, but you’re like ‘oh, we get to go college!’

What do you like to do in your downtime?

Andrea Gabriel: Well, I’m big into LA. I come from New York. So if I have the entire day, I love to drive to the beach – or go through the canyons. Go through Topanga Canyon and try to find a good hike. I love the outdoors – it’s just so beautiful here. People laugh when they ask where I live – “Omigod, where do you live? Oregon?” – “Oh, no Hollywood.” There’s just so much natural beauty here. I just love being able to see so much sky everyday being from Manahattan.

What would your dream role be?

Andrea Gabriel: I’d love to do period pieces. I would love to do actual historical period pieces. That extra element that takes place when they have to create an entire time period is exciting, and I’m a history buff. Something that takes place around the 1800’s in Europe or even the 20’s in America. Some kind of epic film that takes place in another time period – that would be a complete dream. Just to wear those costumes and be constrained in a very different way than just your shoes and a too-tight bra – it would be so fasinating and informative about your character.

What’s next for you?

Andrea Gabriel: Right now I’m working on a play called Snow. I’m converting it to a film format. That’s been a work in-progress for a few years. I think eventually I’m going to make in a indie-feature. It’s something that I wrote years ago. I’ve written a few screenplays, and this is one that I think would be fun to commit to for a certain amount of time.

How does that balance out for you – are you more an actor or more a writer?

Andrea Gabriel: I’m an actor. I’m just a creative person. I figure if I wasn’t a good writer, I’d take to renovating homes… not renovating… decorating homes. [Laughs] I don’t see myself with power tools. I just like to express myself in the world around me. And I love writing, but sometimes it feels a little too minute. Sometimes, at the end of the day, there’s just not enough colors involved – visually, there are just words on a page. But then you take the other step of creating it and putting it in a play or a movie… It’s a little less instance gradification… but it has the longest duration.

Andrea Gabriel returns as Nadia on tonight’s episode of Lost! Also, be sure you check out her official website at http://www.andreagabriel.info!

Sigourney Weaver May Return For 'Avatar 2'