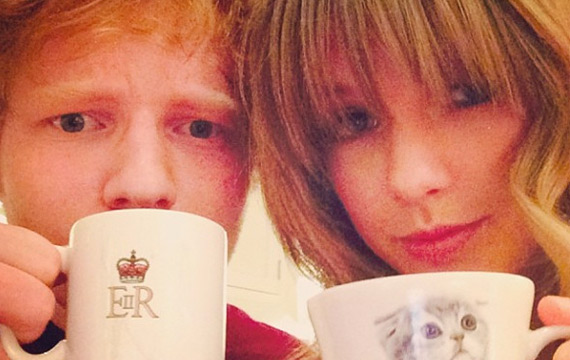 Taylor Swift and Ed Sheeran were left cowering in a bathroom when police busted a party in Mark Ronson’s hotel room.

The singers went back to Ronson’s suite after the 2015 Grammy Awards in Los Angeles earlier this month, but cops later arrived to shut the raucous bash down.

Swift immediately grabbed her pop pal and told him to hide, and they snuck off to the restroom when the officers weren’t looking.

Sheeran tells BBC Radio 1, “We were at a party in Mark Ronson’s room, and then the police shut it down.”

Swift adds, “It made us feel so cool! We had to hide in a bathroom. I grabbed Ed and I was like, ‘Cops are here, come here, come with me.’ Who would have thought that I was the one who knew how to get going?”

The two were not the only ones who kept away from the officers – they also discovered Irish singer/songwriter Hozier hiding behind a door.

Sheeran continues, “Hozier was just standing behind a door and I didn’t realize. I opened it up and he was just behind there, standing there.”

Swift interjects, “And he is a tall dude so seeing him stand behind a door is just an odd sight. A lot of weird things happened that night…. He didn’t want to get caught either.”