‘Arrow’/ ‘Flash’ Team-Up Spinoff Could Be Headed Our Way 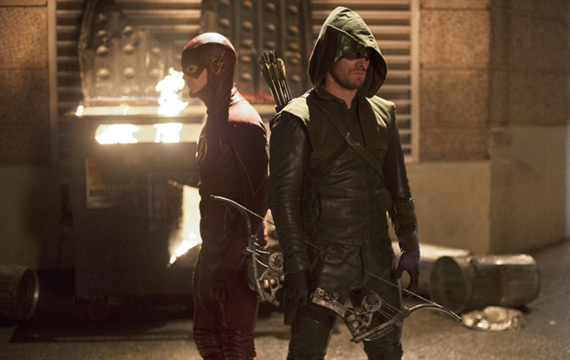 Fans of CW’s hit superhero shows Arrow and The Flash are in for a treat, as the network is reportedly working on developing a spinoff featuring recurring character from both shows.

Deadline.com is reporting The CW is currently working with the masterminds behind Arrow, Greg Berlanti, Andrew Kreisberg and Marc Guggenheim, on a project that would star Brandon Routh, Victor Garber, Wentworth Miller and Caity Lotz. Kreisberg and Berlanti are also the creators of The CW’s other hit superhero series, The Flash.

Routh will reportedly reprise his role as Arrow‘s Ray Palmer/The Atom, with Garber and Miller reprising their Flash roles as Dr. Martin Stein and Leonard Snart/Captain Cold, respectively. Details on Lotz’s role are scarce at the time, seeing as how her Arrow character was killed off (although we know that doesn’t mean much in superhero universes).

The show wouldn’t debut until next season, but seeing how it’s currently being described as “a superhero team-up show,” the project sounds like it could be well worth the wait.

Deadline is also reporting that sources told them the show has a good shot at skipping all that icky pilot business and “going straight to series, possibly for next midseason.”

Let us know your thoughts on the (possible) new series below!

Dragons Are Coming in New 'Game of Thrones' Key Art