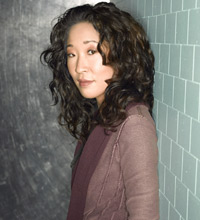 With the season five DVD of Grey’s Anatomy about to released, we sit down for a chat with series regular Sandra Oh. Is the actress happy to see romance blossom in her character’s life? Does Sandra think she would make a good doctor? And why exactly did she sign up for the medical drama? Read on for all the answers…

Cristina finds love in season five of Grey’s Anatomy, but is romance going to soften her character?

Sandra Oh: No way. There is an episode in season five where the beautiful Faye Dunaway comes onto our show. She plays the first female surgeon of Seattle Grace and there’s a wonderful old school/new school head-to-head battle. Cristina goes for Faye Dunaway’s character, so you will still see vintage Cristina, which I just adore playing.

How did it feel to act against such a legend?

Sandra Oh: It was fantastic. It’s hard because you try to erase all this iconography out of your head when you’re facing her, but to be in the presence of Faye Dunaway was fascinating. I’m so blessed to be able to say that in my career. That woman understands everything going on and it’s really interesting to see her act up close. She is amazing.

Were you sad when Kate Walsh and Isaiah Washington left Grey’s Anatomy?

Sandra Oh: Life tumbles on. I have no control over these things and the dynamic certainly changed within the cast and the show when they left. However, we’ve all learned to roll along with these changes.

Were you excited to discover Cristina finds a new love interest this season?

Sandra Oh: I was really pleased with it because she has had a very long, dry spell. You know what? I appreciate the way that Cristina was alone for a while because she’s not the kind of character that would hop into bed with someone immediately after such a significant relationship. In the fourth season, Cristina’s storyline was more about her being frustrated with her desire to rise up in the cardiothoracic world. Now, in this fifth season, they’ve changed direction and you see her relationship with Owen Hunt grow. I definitely welcomed the storyline and I’m very pleased with it. I’m also very pleased that I get to work alongside Kevin McKidd [who plays Owen Hunt in the show]. I think he’s a wonderful actor.

How does Cristina and Owen’s relationship develop in season five?

Sandra Oh: You see them figure each other out, but it’s a little complicated. There is a genuine connection between the two of them. Owen Hunt seems to open up Cristina and you are able to see this character as you have never seen her before. I’ve had some amazing scenes to work on in season five. I’m very happy with it.

Do you sometimes pinch yourself that you’re in a long-running show with a potential contract of two more years?

Sandra Oh: For sure. When we first started on the show, it was really tough because there was a lot of work involved in bringing Grey’s Anatomy to the screen. The first three years were full on. You would wake up, go to work, then go to sleep and wake up for work again. It was non-stop, but they’ve started to make it easier on us now. I’m supremely thankful and grateful to see what’s going on.

How did you cope with the pressure in the first three years?

Sandra Oh: This is a very individual and very personal question – and I can’t speak for anyone except myself. Taking care of my health was paramount. It was exhausting and your adrenals are shot, but everyone was on a steep learning curve back then. Not only the actors, but the crew and the writers as well. Everyone.

Do you think that TV offers more for actors these days?

Sandra Oh: That’s a very interesting and multi-layered question. I have always found television welcoming and I think television is 10 to 15 years ahead of casting compared to films. Independent films are where I spent most of my life, but I’m not talking about that here. I’m talking about the giant, $200,000 gazillion films where they have two to three bankable stars. That’s the way those machines are run, but they have not necessarily welcomed my skill set into its fold, so I’m not going to go there.

So why did you sign up for Grey’s Anatomy?

Sandra Oh: I’m very proud of this show and I think it came along at the right time for me. It’s a changing time on television because five or ten years ago you wouldn’t have a major network show where half of the cast were not white. I’ve got to bring up Slumdog Millionaire for a second here. There’s a lot of talk about why certain companies let the film go or wanted to make it straight to video – but I’m so glad that someone said, “No, I can do something with this.” I don’t think a lot of people saw that vision. They just thought, ‘What are we going to do with a film filled with brown people that no one knows?’ Someone saw its potential and look what happens. I think that’s great. I think Grey’s Anatomy is similar in some ways because our casting has changed television. It’s great to see such a mixed cast together on a show.

Has your medical knowledge improved after working on the show for so long?

Sandra Oh: I think I’ve become much more of a hypochondriac because you know a symptom could mean a million things. And then I get scared that it’s a million things! I know more general things about the body, but my medical knowledge hasn’t really expanded.

Did you ever consider being a doctor when you were growing up?

Sandra Oh: Oh, no. I was terrible at math. All my parents’ dreams and hopes for me to be a doctor quickly vanished around junior high, where I discovered I was not the science and math kid. Nope. But I will say now, having done this for a while, that it’s a really important job and it’s really hard. I feel there’s such great honor in being a good doctor. I never thought about doctors when I was younger, but I think about it much more since being on the show.

Is there any particular place you like to rest on the set?

Sandra Oh: Interesting question! Well, there are plenty of beds around, but I don’t like to lie down in front of the crew because they can’t lie down. But every now and then I take ten minutes to myself when they’re setting up. I’ll pull the curtain around the bed and relax. We also have a massage chair on the set. It’s actually for the crew, but you can sit in it if you want to.

Life on set seems incredibly busy… Is there ever time for jokes?

Sandra Oh: Oh, sure. We work hard on the set, but we also have time for fun every now and then. One of my funniest memories happened during season five when I was filming a scene with Kevin McKidd. We’re supposed to walk slowly towards each other, looking deep into each other’s eyes. It was a slushy scene. They had to film it from loads of different angles – but at one point, Kevin walks towards me when someone in the crew cranked up a Barry White song. You can see Kevin’s face thinking, ‘What’s going on here? I’m just going to keep on acting.’ And then he gets the joke and starts to crack up into laughter. It was really funny. The editors cut together this entire video of Owen and Cristina falling in love to a Barry White soundtrack. I believe it’s on YouTube. It’s hilarious.