USA Network’s newest series, Dig, premieres in just a few hours, and we know you all are going to love it as much as we do! We’ve had a chance to view the first couple episodes, and we’re really happy that USA Network took a chance on such a different show from their normal lineup.

All week, I’ve been sharing highlights from my interviews with the cast and creators from my set visit in Albuquerque last December. The first night we arrived, we were able to grab a few cocktails with series co-creators and executive producers, Tim Kring and Gideon Raff. Raff, who has done an incredible job with Homeland, sat down with us for an interview on set the following day as well.

Check out our interview with Raff below!

What made you go to Tim with this idea?

Well, I was working at the time on a show called Tyrant, that I’d created and I wanted a partner on Dig. I’ve been a huge fan of Tim. Funny enough, now that I know him and work with him, I’m even a bigger fan of his. I just thought he would be perfect for this, because we tell stories from different points of views and they all converge – and Tim does that brilliantly. I met him, and I met other people too, but the minute I met him it was… we’re so much in sync about how to tell a story and what we like and our sensibilities that it’s really a match made in heaven.

Can you talk about how your personal experience living in Israel informed the series?

It informs everything I do but definitely Dig, because it’s an archaeological thriller based in Jerusalem. I was born and raised in Jerusalem, and I am in love with that city. It is a city that means everything to so many people around the world – So many people and they haven’t even been to Jerusalem. The term ‘Jerusalem’ means a lot. We study about it, we learn about it. Whether it’s Sunday school, the synagogue, the mosque, we all have this place that we, in our head, see as Jerusalem. Bringing this project to Israel was really a double treat. One was telling a big story in my hometown, but then also bringing a production to my hometown and being able to employ so many of the industry in Israel, which is a fantastic industry, small, but fantastic.

Is there anything about Jerusalem that you’re excited American audiences will learn? 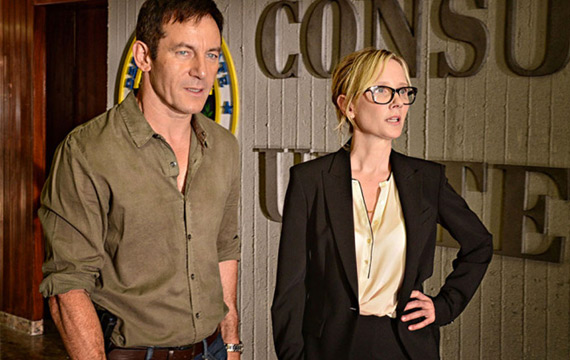 What can you tease about the Peter and Lynn relationship?

What I love about this relationship is that it’s a grown up relationship. It’s not a TV relationship. It is two people who don’t want to be together, but they find each other in each other’s arm now and then. They’re very good friends, and they work very well together and they sometimes go to bed together, but not in a romantic hope that this will end in marriage. Peter is married, and he’s got a wife that he’s separated from but still married to, and he’s dealing with a very complex relationship there. Lynn is a woman who doesn’t want this damaged man as her man. She just wants to, every now and then, bed him.

It’s two strong people who are both damaged in their own way who don’t want love, but have needs. That gets complex, because as the series progresses, you see things that happen to both of them and they need each other in ways they hoped they wouldn’t.