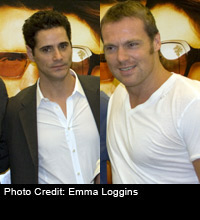 Have you guys been to Comic Con before?

Michael Shanks: Oh yeah. I’ve been seven of the last eight years. I’ve seen my Comic Con for sure.

We were just talking about how it has gotten bigger and bigger. Is that your perception as well?

Michael Shanks: Absolutely, it’s gotten bigger and bigger. Eight years ago when I came there was like less than half the people that are here in terms of capacity. There’s 125,000 or 126,000 people here this year. It’s become quite corporate compared to when I was first here. Every year it seems to change. It’s still very exciting. I’m glad that a lot of the hardcore fans are still coming out. It’s not become a due for the corporations. It’s still very much for the fans. It’s a great window to see certain things. It’s a great platform for shows that aren’t usually allowed to come to conventions like Burn Notice and Psych to actually get some feedback. Otherwise their kind of sitting in a vacuum going well Nelson says this, and our message board says this. This is a great thing for Matt Nix to come here a find out how the fans really adore the show.

Seth Peterson: On the opposite of the scale, I’ve never been. Happy to be here.

Having not been here before, what was it like for you being out on that stage?

Seth Peterson: That was crazy, I’ve never seen anything like that before. I mean, I’ve done press junkets, but there like press room size with a couple hundred people in them, and that was outrageous. The one thing that was my favorite part was right before we started, because when we sat down the lights were all hot so I couldn’t really see everything. When they turned them down for the monitors so everyone could see the clips, I was just tripping man over how many people were out there. It was so awesome. It was electric, you know the energy was so positive. It was really a lot of fun. The only negative that I could come up with was that, you know and it sucks, was Bruce Campbell. I mean having him there just sucked the energy right out of the place and made everybody uncomfortable.

Michael Shanks: He can be a real downer sometimes. It’s too bad about his drinking and everything like that.

Seth Peterson: He’s taken that same stuff from the set and he’s just brought it and affected the rest of us.

You could kill him off by the end of the season and just get rid of that whole element.

Seth Peterson: I sure hope so. I’ve had enough.

Michael Shanks: He might get killed off before he leaves the building today. [laughs]

Seth Peterson: It was amazing, he was absolutely amazing.

The way you all interacted up on stage, is that indicative to the way it is on set? It seems like everyone gets along so well because you guys seem very close knit?

Seth Peterson: It’s a close knit family. They filmed the pilot, and the character Nate was introduced in the very next episodes. The very first scene shot after the pilot, when they went to Miami to film on location, I was there from day one and they treated me like family. I don’t know what it’s like for you guys.

Michael Shanks: With people like Seth, Ben, and Alfredo, I’ve never met them before. But what I’ve seen in most shows that I’ve been on is the top-down mentality. If the creator executive producer has a certain sense of humor, like Matt does, it’s very dry, but he has a great sense of humor-like attracts like. What you see is a group of people that he’s worked with, that he likes, and the show likes. Their all of a similar mindset and have a certain sense of humor. For those of us who hadn’t met before, I think there was a comradery that’s already quickly developed. Having Bruce Campbell around to keep it nice and toilety and light never hurts. There’s definitely levity that I think stems from the beginning with Matt as you saw. He’s the voice of the show. He has that voice in his head out for everybody to see. Everybody plays off of that and keeps it in the place it should be.

Burn Notice is a fun show to watch. Is there a lot of fun on the set as well.

Michael Shanks: I think so. I think the cast is really wonderful. I think the fact that the show doesn’t shoot in Los Angeles- I’m used to wonderful friendly crews in Vancouver . Doing that show for so many years, we had a real family vibe there too. I didn’t know what to expect when I came to Miami. They have that too. Very quickly, I did four episodes in one season, but the way I felt around there, you’d think I was around all the time. Everybody’s really sweet, nurturing, and easy going. It’s a great place to film. When you’re watching the show, that fun does come out. If there was more trauma you’d see it somehow. Something would be awkward about the way it was presented.

Are we going to see anymore of Nate this season?

Seth Peterson- Yeah, you’re going to see Nate again for sure before the seasons up. I’m heading out to Miami next week, or the week after that to film some interesting storylines that I just read yesterday that I’m still trying to adjust to. They gave Nate a wife. That’s something that’s pretty crazy, and I had not seen coming. So we’ll see what that’s about.