Things are probably awkward in the Kardashdian household tonight after Rob Kardashian posted a photo from Gone Girl on Instagram, comparing sister Kim Kardashian to the film’s leading lady psycho. The caption on the photo read, “This is my sister kim, the bitch from Gone Girl…” 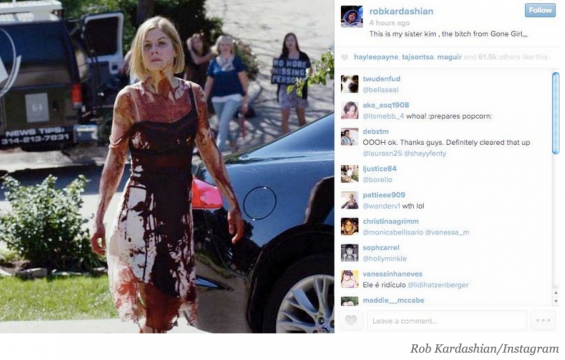 For those that haven’t seen Gone Girl, the comparison is unflattering to say the least. The character in the film not only fakes her on death and pins it on her husband, but she also brutally murders her ex-boyfriend before resurfacing and trapping her husband from ever being able to leave her.

The photo, which surprisingly hasn’t been removed yet, has over 74,000 likes. Kim has yet to comment on the situation, though she’s been tweeting all day.

It’s unclear what caused Rob to post the photo and the comment, he has not been seen in public in several months and has distanced himself from the family’s reality series Keeping Up with the Kardashians.

Khloe Kardashian recently commented on Rob to Wonderwall saying, “I just feel, especially over the last year, Rob has become very introverted and has a kind of social anxiety. He’s definitely not at his happiest place that he once was, and I know he can get to that happy place and he will.”

We’ll keep you posted with what we hear as someone from the Kardashian family will surely be commenting on the incident soon.