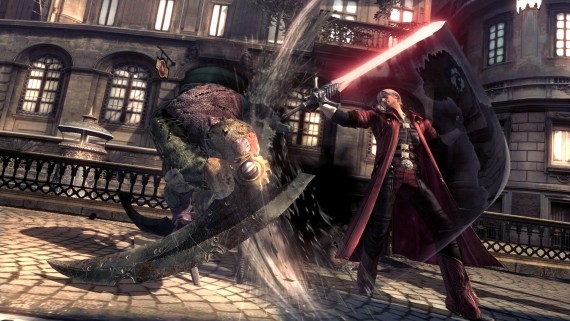 While Devil May Cry 4 Special Edition was announced a little while back, Capcom finally offered some new details on what the enhanced version of one of the last generation’s most enjoyable action games will bring to the table. One of the most significant additions to the new version is an expansion to the roster. The original release had characters Nero and Dante playable, but Special Edition throws in a few more fan-favorite characters to slay some enemies with.

Returning to playable character status after the series’ previous special edition title, Dante’s brother, Vergil, will be usable in any mission in the story mode. His gameplay has been described as being based off of his appearance in Devil May Cry 3 Special Edition with some aspects of the Vergil in DmC: Devil May Cry thrown in for good measure. He also has a new Concentration feature that offers a power bonus to Vergil based on his performance. Another returning playable character is Trish, who originally appeared in the first game in the series and was an unlockable playable character in the second. While she is playable in Dante’s levels in the story mode, she doesn’t have the ability to switch weapons like Dante does. Instead, she uses the large sword, Sparda, as well as pistols and her hands. Finally, Lady makes her first playable appearance in the series, and she can be used in Nero’s levels. This effectively replaces Nero’s Devil Bringer for situational travelling segments with the grappling hook on Lady’s large rocket launcher, the Kalina Ann. As opposed to the rest of the cast, Lady focuses on combat with firearms instead of having them as a supplementary tool in combos, which should offer a different experience as opposed to the other four characters.

In addition to the roster expansion, Devil May Cry 4 Special Edition also adds a couple of new modes. While in the initial PC version, the Legendary Dark Knight mode finally comes to consoles for the first time. In this mode there’s absolutely no shortage of enemies as the amount of foes you need to kill massively increases. For those who felt the previous version of Devil May Cry 4 needed a little more of a kick, this might just be for you. Also new to the game is a turbo mode that increases the speed of the game by 20%. The enhanced remaster will be available digitally this summer for the PlayStation 4, Xbox One, and PC. The trailer can be seen below.