Blue Man Group Review: A Theater Experience Like No Other 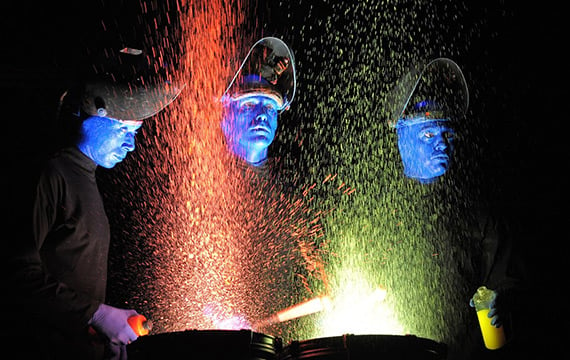 I’m not sure anyone really has the words to accurately describe a Blue Man Group show. There’s probably no need for it now, because at this point, most people have probably seen some form of a Blue Man Group performance, whether at a theater or on television commercials. But can you imagine being one of the first people to try to describe to one of your friends why you found Blue Man so entertaining? “Oh yeah, it’s these three guys, and they’re all painted blue. They bang on PVC pipes and play drums with paint on them… and throw marshmallows into each other’s mouths… and blow toilet paper into the crowd with a fan… and,” [as an increasingly confused look falls onto their face] “…uhhh…just trust me it was fun.”

It’s one of those shows you just have to experience, and for those living in Atlanta, the traveling show will be playing at The Fox Theatre from now until April 12th.

The first time I saw Blue Man Group was in 2004 at the Astor Place Theater in New York (I’ve even got a photo from it below) – a small hole in the wall theater way off Broadway. The experience is completely different in a large venue like The Fox, yet still the same. Eerily still the same. A lot of the graphics and visual media used in the show are the same ones I saw over ten years ago, adding a bit of charm to a performance that has had to change slightly to keep up with the times, but it genuinely sticks to its roots. It’s hard to believe the Blue Man Group production has been alive for almost 25 years now.

The large venue doesn’t seem to take anything away from the subtle movements and improvisations that give the show its character – and it also didn’t seem like there was a bad seat, although audience interaction is limited to the orchestra level. Regardless if you’ve seen a Blue Man performance recently, I don’t think you can have a bad time or get tired of the same antics. There’s something about the childlike wonderment and curiosity the blue men portray for just about everything that you can’t help but smile. Blue Man Group is a visually stimulating, rhythmic sensation that would definitely be worth your time this weekend.

A 'She's All That' Remake Is in the Works

'The Originals' Sneak Peek-Episode 2.18: Night Has a Thousand Eyes