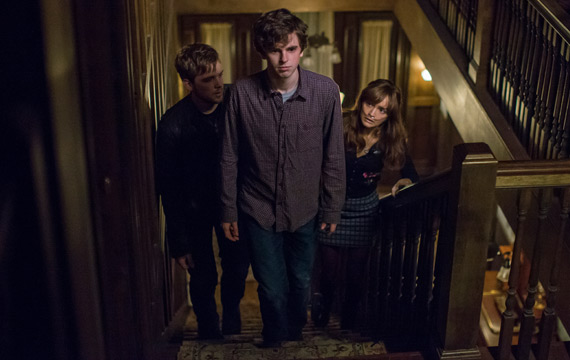 In next week’s episode of Bates Motel, we’ll see a new, disturbing side to Norman what we haven’t seen before…and if that worries you, it probably should.

Things continue to spiral out of control for Norma and the her family and now the matriarch of the family is considering leaving White Pine Bay for good…which it doesn’t seem Norman is too happy about.

Keep scrolling to find out what’s ahead for Norman, Norma and Dylan on the next episode of Bates Motel:

Norma considers a life outside of White Pine Bay, leaving Norman in a vulnerable position. Dylan and Emma bond while helping Norman through a rough night. Romero is confronted by a new threat. And Caleb makes a difficult decision after learning of Norma’s sudden departure.

I’ll be chatting with Dylan Massett himself, Max Thieriot tomorrow, along with Norma’s brother/Dylan’s father Caleb (Kenny Johnson) and newcomer Chick Hogan (Ryan Hurst), so if you have any questions for them, be sure to leave them in the comments below!

Tune in to the newest episode of Bates Motel April 13th at 9PM ET/PT.