by The Jacob
in Entertainment, Movie News, Movies 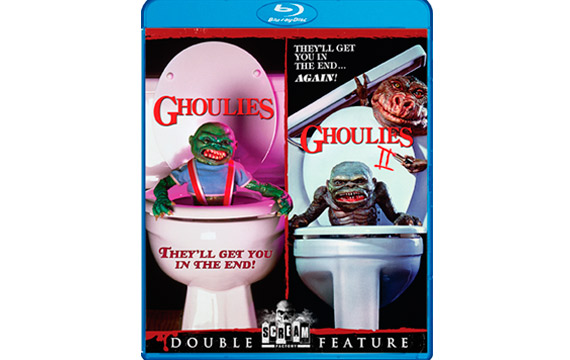 In all honestly, the Ghoulies movies are ones that I had a passing familiarity with; that familiarity being that I remember seeing the box covers every single time my family went to the video store. I don’t remember ever renting it or seeing it prior to this week’s Scream Factory release. That said, Ghoulies is a movie that is very indicative of the kind of movies that were popular in the mid-80’s.

I’m sure you’ll remember a trend aroud that time where we saw small creatures running amok. It started with Gremlins and includes movies like Critters and the more comedic Munchies. Of these, Ghoulies seems to be the only one I had not seen, though I am not sure why that is the case. In case, like me, you haven’t seen them before  here’s a little insight into their respective plots:

Ghoulies is a fairly straightforward film about a young adult, Jonathan, who inherits his father’s mansion and he and his girlfriend decide to throw a party there. In the course of events Jonathan finds out his father was involved with the occult and decides that they should dabble in some spells as part of the party. This brings forth small (very ugly) creatures that run amok all over the house and pick off party guests one by one.

Ghoulies II has a fairly similar storyline, except this time it’s set in a traveling carnival. The Ghoulies start off as a sideshow attraction but soon people realize the dead bodies are not part of the act and are actually carnival patrons and the people try to kill the Ghoulies. From this point the Ghoulies go on a rampage through the carnival and make pretty much every human in the film a potential victim.

I understand that those plots may not sound that similar, but in each of these there is a similar setup: Humans do something to conjure or agitate the Ghoulies and the rest of the movie is the Ghoulies taking out all the people they come across. The storyline is somewhat irrelevant, it’s just a setup to let the Ghoulies run loose. By the way, this is totally fine with me. That’s what these movies are intended to do. We want maximum kills with minimal story. Beyond those similarities the movies are actually very different in execution.

The original Ghoulies was made as a straightforward horror movie, which was the exact kind of movie I rented every weekend in high school. Me and my buddies love to watch movies that were generally bad even though you know the makers thought they were making something great. The story is kind of silly, the Ghoulies, while ugly, are not all that scary (they were designed by John Carl Buechler, who would go on to direct Troll a couple years later) and there are parts of the ending that just don’t make any sense at all. But that kind of makes it fun to watch, mainly because it didn’t know it was so bad. In many ways it’s fun to watch a 100% serious approach to a goofy movie.

If nothing else, Ghoulies does give us the first ever appearance from Mariska Hargitay (Law &Order: SVU) rocking full 80’s hair. That alone is worth a peek. Conversely, Ghoulies II is fun, and a far superior movie, because it knew exactly what it was. It is approached with campiness and never takes itself serious at any time. It knows that it is silly and people are there for the kills and creatures and doesn’t disappoint. With a total of 10 deaths (9 for sure seen on screen) it makes good use of the Ghoulies and their screen time.

Ghoulies is presented in 1080p with a 1.85:1 ratio. Unfortunately, while very clean, the picture quality is not entirely up to par with other Scream Factory releases, though to be fair this might be a result of an extremely low budget (and therefore quality) original. There is only so much you can do. The details are not super sharp and can be a little grainy at time, though it is superior to most DVD releases; it’s just not as good as most Scream Factory releases. Based on their past work, I imagine it’s probably the best image one could hope to get.

Ghoulies II also an 1080p image at 1.85:1, but is way to the first film in all aspects of imagery. The colors, especially in a colorful carnival setting are bright and vibrant and the blacks are rich and deep. The detail is more closer to what we have come to expect with small details being clearly sen with no problems. With the exception of one scene, which may have damage to the original, the image is incredibly stable and clean.

Both films are presented in either English DTS-HD MA 5.1 surround sound or 2.0 mono and they perform pretty equally, all thkngs considered. The dialogue is well-balanced and clear. The low-end bass sounds work well for the movies. Neither film has much sound in the middle range, which is why mono works just fine for either one. Both come with subtitles in English as well.

Fun Fact: Both films where caught in a “moral panic” in the 1980’s accusing the popular culture of endorsing and glamorizing witchcraft, the occult, and satanism.

Coming to Netflix This Week: 'Noah,' 'Sons of Anarchy' and More!