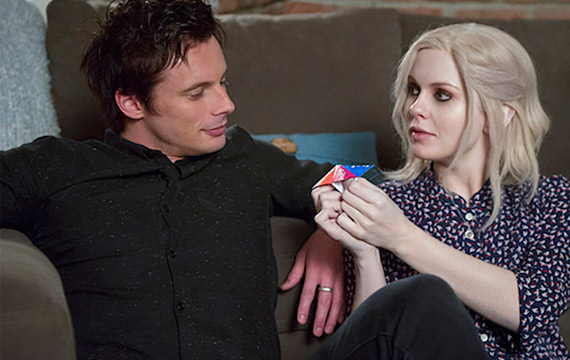 Fans will get the chance to see the motherly side of Liv on the next episode of iZombie.

Next week, Liv will have to eat the brains of a pregnant woman in order to find out what happened to her. By now you know that Liv’s diet brings a whole new meaning to the phrase “you are what you eat,” so seeing how she’ll deal with her newfound maternal instincts should be interesting. It also looks like Major makes a *ahem* major discovery.

If you missed this week’s episode, or just want to relive it, check out our recap and review! While you’re at it, be sure to take a look at our fashion picks from this week as well.

Keep scrolling to find out what’s next on iZombie:

A group of teens get a scare when a disheveled young pregnant woman approaches them muttering for help. Unfortunately, the woman doesn’t survive but her baby does. Liv (Rose McIver) and Clive (Malcolm Goodwin) begin questioning suspects in her murder, and after consuming the victim’s brain, a fierce maternal instinct kicks in for Liv. Meanwhile, Major (Robert Buckley) makes a shocking discovery.

Don’t miss an all new iZombie, Tuesdays at 8pm on The CW!

'The Age of Adaline' Review: An Ageless Romance

I Need That Look! 'The Vampire Diaries' Episode 6.19- Because

Release Date for Next 'Fast & Furious' Installment Announced at CinemaCon