The Royals gets juicier and juicier each week and the fashion gets better and better right along with it.

The episode ended on an uber dramatic note, with an assassination attempt being made against the king after his announcement urging the citizens to vote to abolish the monarchy. We don’t know if the king lives or dies from his attack yet, but since this isn’t Game of Thrones, we’re going to guess he lives.

Queen Helena has a plethora of fabulous dresses, so it’s no wonder one finally caught our eye. This week’s pick is probably a little out of some of your budgets (definitely mine), but that doesn’t mean you still can’t salivate over it.

The pink and metallic-gold brocade dress Queen Helena wore in the royal family photo technically made it’s first appearance during the pilot, but since that was before ‘I Need That Look’s time, we made sure to not miss it when it popped back up again in a blink and you’ll miss it moment from Sunday’s episode. The beautiful, short dress has a pink, electric-blue and light-grey crystal embellished neckline with faux-pearl droplets that really make it pop. 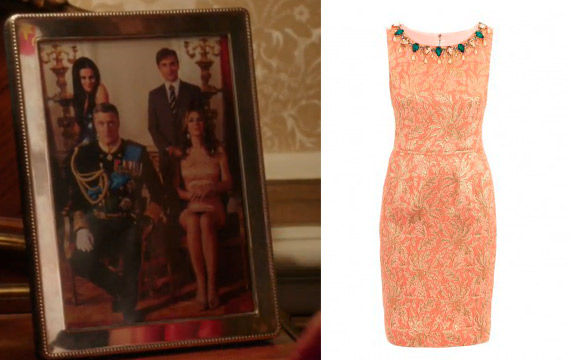 Queen Helena’s Dolce & Gabbana Metallic Silk-Brocade Shift Dress is no longer available for purchase, but is always available to covet.

I Need That Look! 'The Royals' Episode 1.07: Your Sovereignty of Reason