A while back we told you about an over-the-air DVR called the TabloTV (you can read about it here). If you have not read it, I recommend you give it a look before continuing, as this article is to let you know about some cool upgrades that have happened since that last post and there are a LOT!

First thing I want to mention is that in the previous article I touched on the capability of the TabloTV to rewind and fast forward the way that most DVRs do except it did it more like a media file so instead of scrolling you kind of had to guess and jump to the next part. It became somewhat of a guessing game. Shortly after our last article that function was upgraded in a major way. Now the TabloTV uses thumbnails to let you see where you are in a particular video and go to the exact frame where the show starts back up. It actually works very well and somewhat better than a tradition DVR. On a traditional DVR you fast forward through an image and when your show comes back on you hit play and it usually has an autocorrect that goes back a few seconds to where you hit play. That works, but you’re always having to pay attention to when the show comes back on. On the TabloTV thumbnail system you actually see the frames that are coming up so you can easily anticipate when your show is coming back on and start back in the exact spot you want. It’s pretty cool. You can use the forward and reverse in live programming, though it uses the previous navigation for live TV (media file version) whereas the thumbnail selection works on shows that have been entirely recorded. If you plan to wait until a show has been on for 20 minutes or so and then start you will not be able to use thumbnails but if you wait until it’s over you will be very satisfied with this function. It also tells you how much you have watched and how much of the program remains. Below is what the thumbnails look like. 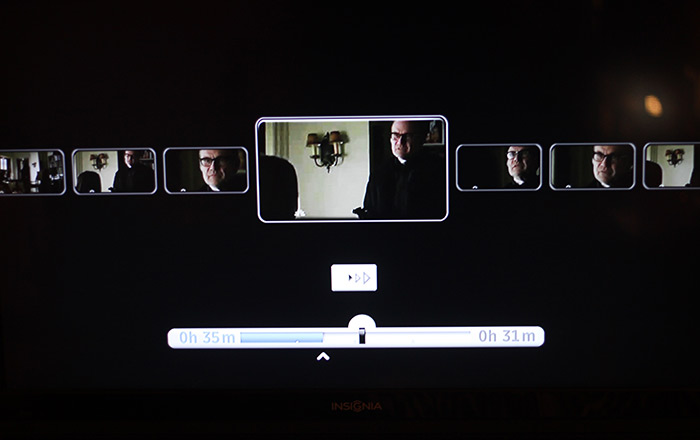 Moving on from that upgrade there is a huge upgrade currently available in the Roku Channel format and hopefully moving its way into other streaming platforms as well. The Roku Channel was used for the purposes of this review so I cannot speak to the other platforms’ functionality, but the new Roku format is pretty great and as close to traditional DVR as one could hope to get. It builds on an already good system and makes it great, more importantly it makes it more familiar and intuitive for those that are already users of DVRs through their cable or satellite providers.

The online functionality remains functionally unchanged. The information in the previous review would still apply to using the online capabilities of the TabloTV. You can still schedule and delete recording from a device as well as stream recorded and live programming on them.

On screen is where the largest leap in functionality has occurred. First off, as you will see, the onscreen navigation has pretty much eliminated the need to get online for most of your major tasks. This is a great change; since the upgrade I have not use a device to interface with TabloTV other than to watch programming. It’s a huge time saver. The change is design is noticeable immediately when you go to the TabloTV Channel. There are only two options to start: Live TV and Recordings. From there you can navigate either of the two menus. I am going to start with Recordings. 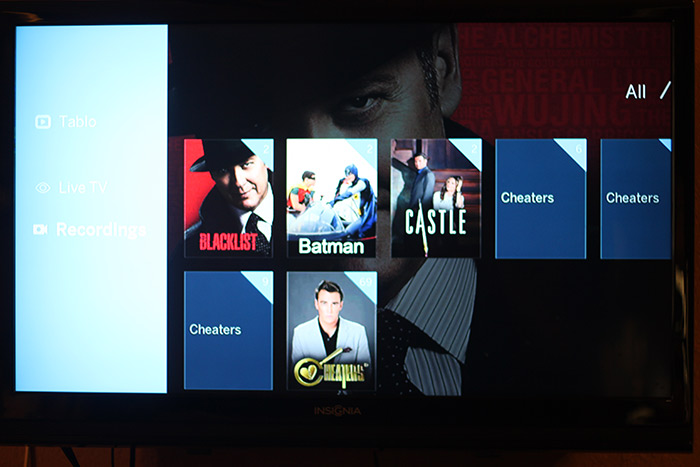 From there you can navigate using your remote control. I have chosen The Blacklist for this demo. When you select on the show it gives you a general description of the program. 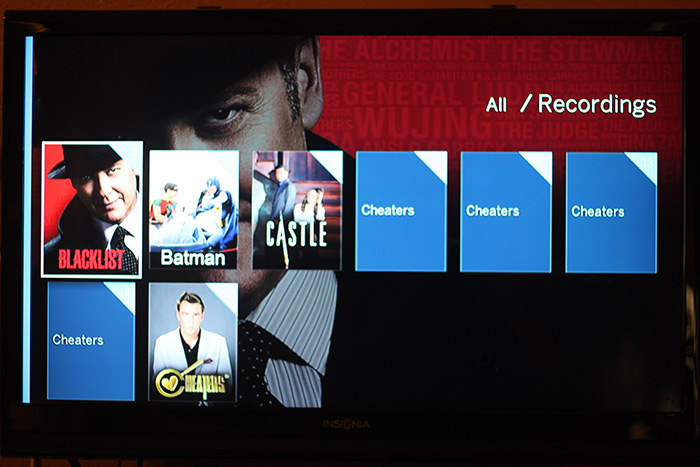 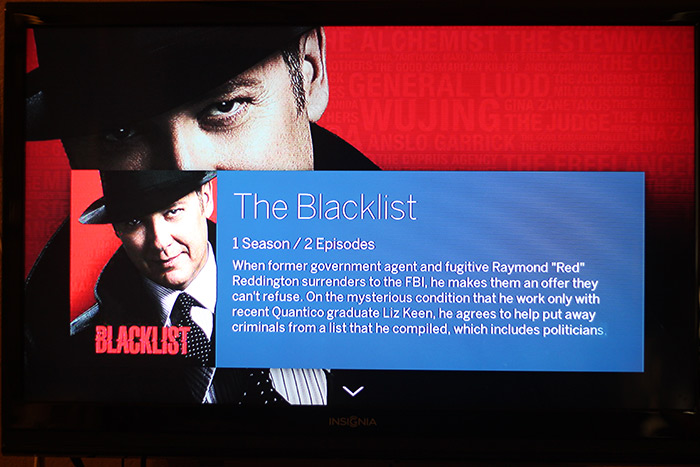 If you arrow down you can come to the actual programming you have recorded. On a television series it lets you know the episode name as well as the date it was recorded and it keeps it in order for you. 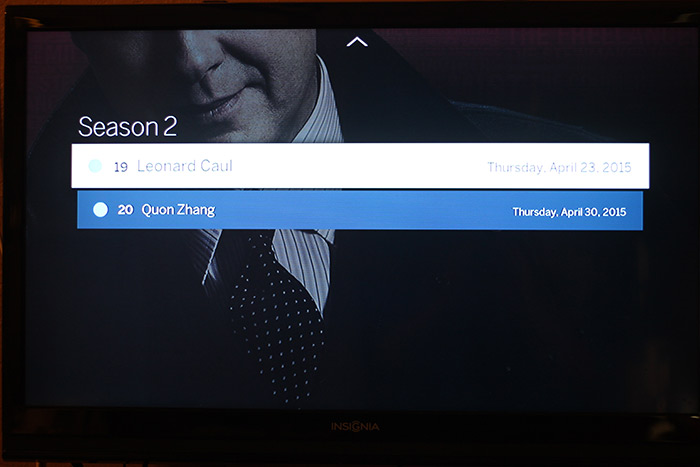 If you select a specific episode it gives you an episode description. But the coolest upgrade from here is that it gives you much more control through the onscreen interface. You can watch the program, mark watched, protect (which keeps somebody else from deleting it), and you can delete with the touch of a button. This is a much welcome upgrade and helps keep things organized. No longer do you need a device to delete recordings after you watch. You can do that easily right when you are done. 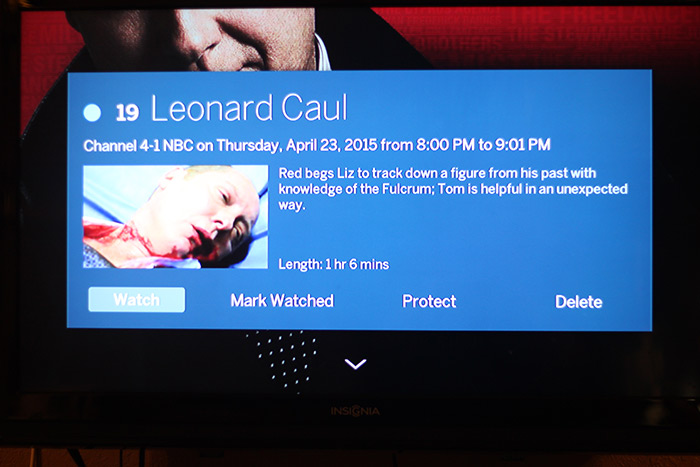 Now for the REALLY cool part: the live navigation. Previously, TabloTV only gave a list of the stations and what was currently playing on those stations. In this new version we actually get a full grid format menu like we’re used to seeing on traditional forms of television. You can move up and down as well as forward in time to see what is on a specific channel at a particular time. It’s a much needed improvement and brings the TabloTV to the front in OTA DVR systems. 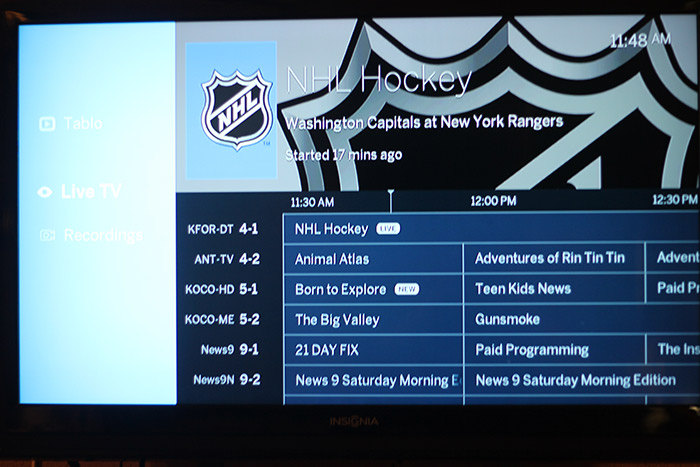 Not only that, but can schedule your recording options from this menu as well. If I move my selector down to Channel 5-2 and click on Gunsmoke it brings up the below menu 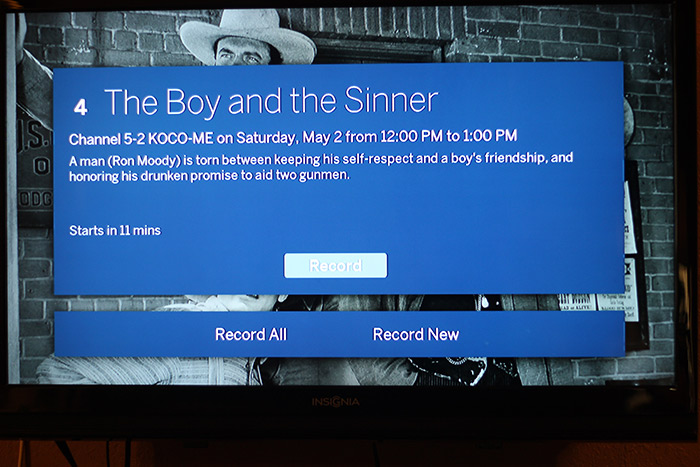 From here I can select Record (for a one-time recording), Record All, or Record new. Options that any DVR user would be familiar with using. After making my selection the menu goes back to the grid menu and we can see an orange marker in the corner of Gunsmoke to let us know this program is scheduled to record. 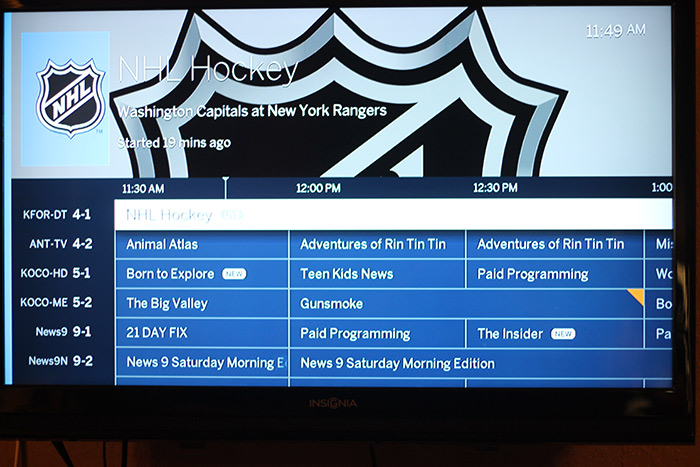 In all, the new changes to the TabloTV Roku interface are amazing. Now you can have DVR capability tat is easy to use, doesn’t need you to access a device to make changes, and so familiar in function that a total newbie would be able to figure it out. Before I thought TabloTV was a really good system and thought it really brought a lot to the table, but with these new upgrades TabloTV easily competes against any Cable or Satellite provider on the ease of which you can program and record a movie or television series. I have been using this system for about 3-4 months now and cannot recommend it enough. Using a TabloTV TV in conjunction with a streaming service or two (Hulu, Netflix, Amazon Prime Streaming) and before long you won’t miss cable at all. Now that Hulu has worked out a deal with AMC for their programming and the TabloTV can record CBS and local programming my cable days are thing of the past!