Marvel has revealed their theatrical poster for upcoming superhero flick Ant-Man and it feels…familiar.

Ant-Man‘s poster includes the titular superhero in costume, front and center, with his supporting cast and foes floating around him, a commonality among most Marvel theatrical posters. Included on the poster are the original Ant-Man and the inventor of the Ant-Man suit Hank Pym, played by Michael Douglas, The Strain star Corey Stoll as Darren Cross/Yellowjacket, Evangline Lilly as Hope van Dyne, Bobby Cannavale as Paxton and Michael Pena as Luis.

Another interesting detail to note is that Marvel released the poster via Twitter and we don’t know about you, but the tweet reads like Ant-Man could be the newest Avenger in the future:

Thanks for making #Avengers #AgeOfUltron a global event! Now, a new poster for the latest member of the team: @AntMan pic.twitter.com/hvs9u2rzSZ

Check out the Ant-Man poster in all its glory below (click to enlarge): 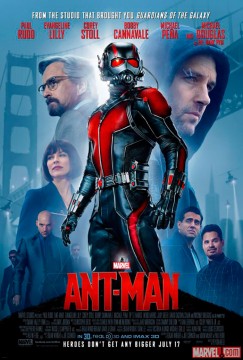 Ant-Man follows the story of thief Scott Lang (Paul Rudd), who must aid his mentor Dr. Hank Pym (Michael Douglas) in safeguarding the mystery of the Ant-Man technology (which allows its user to decrease in size but increase in strength) from various threats and plot a heist that will save the Earth.

In case you haven’t seen the trailer yet, you can do that here.

Make sure to catch Ant-Man when it comes to theaters July 17!