Swords & Soldiers II offers gamers with entertaining characters and conversation in this 2D side-scrolling strategy game that’s filled with Vikings, Demons, and Persians, along with many unique abilities that help the player as they attempt to claim victory across 15 campaign missions and more.

The strategy gameplay at first seems pretty straight forward, but each mission has a surprise for gamers as they work towards completing the objective. Objectives basically have players successfully getting their units/soldiers across the map, destroying any enemy presence in the level. However, it’s not always an easy task as players need to use their units wisely and create them at the right moment.

Players are required to collect gold and mana on each map in order to build units and use special abilities. As players earn enough gold, they can call in their soldiers, but it’s important to not always call in soldiers as soon as the gold is available as often times units will be going into a 1 on 1 or 1 on 2 battle that doesn’t favor their soldier. It’s important to be tactically aware of the situation and to call in multiple units at once when gold is available to do so. Also, it’s wise to have enough mana available as well so players can use the mana to offer healing and shields to their soldiers, as well as helping weaken the enemy force by striking them with lightning or turning them into a sheep, which makes them useless for a period of time.

Each one of the special abilities helps make the game very enjoyable and fun to play, especially when turning a stronger enemies into a useless sheep that can’t damage the player’s soldiers at all.

Later on in the game, players also get an ability that allows them to offer gold to an enemy which makes them switch sides and fight for them. Players can also call in special soldiers that can be great for attacking or healing, depending on what the player needs. And there is another special ability that takes the player across the entire map, allowing them to uppercut enemies as they become visible. The unique abilities are, once again, quite entertaining.

Missions also throw surprises at players which keeps things interesting as they progress in the campaign. As Gold is needed to create units, normally players get in the mindset that they need to collect gold and create as many units as possible to throw at the approaching enemy.

In one mission, I successfully created many units and wiped out all enemies in sight. This ended up being the first time I saw all my units at the end of the map with nothing more to do but wait for one of the retrievers to collect a special item (the mission objective) that enemies were protecting. As it turns out, once I took the item, it “woke up” many enemy units behind all of my soldiers.

This was a big surprise that didn’t end well for me.

Since I had all of my guys at the end of the map, there is no way to recall them. Plus, I spent almost all of my gold coins on creating those units to send forward which left me with pretty much nothing to defend my base from these protectors of this item. It was a little rude, but it keeps the game fresh and exciting. It also makes the player more focused when replaying the mission as they now know they can’t send too many units forward as they need to keep the right amount of gold available for creating new units to protect from the counter-attack. 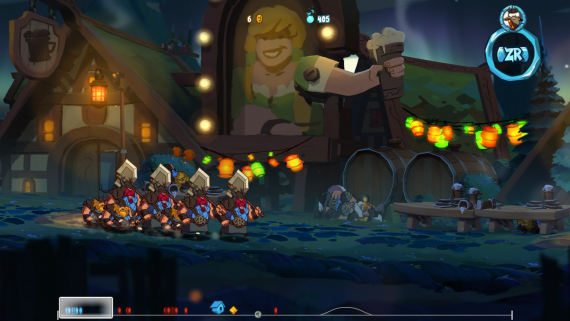 Swords & Soldiers II is still pretty simple and straight-forward with its gameplay, but that doesn’t stop it from being an exciting and highly entertaining strategy game for the Nintendo Wii U. There are moments where it seems like the easiest game on the planet, but then it’s followed by some surprises that make missions a lot more challenging. Plus, while the main objectives in each mission may seem easy, the bonus objectives are sometimes incredibly challenging. This includes objectives such as beating a level in a specific amount of time or keeping a certain unit type alive throughout the entire match. These are difficult objectives and may even drive players crazy at times, but they’re certainly fun to attempt.

Many times I’ve come across levels where I felt I beat it in a really quick time, yet it was more than double the bonus objective time. It’s certainly a challenge to clear stages quickly!

Swords & Soldiers II features 2 player local versus with one player using the TV while the other uses the gamepad, but unfortunately there isn’t online play at all. Still, there is plenty of strategic fun to be had in single player mode, and Wii U owners should seriously consider playing through this title.