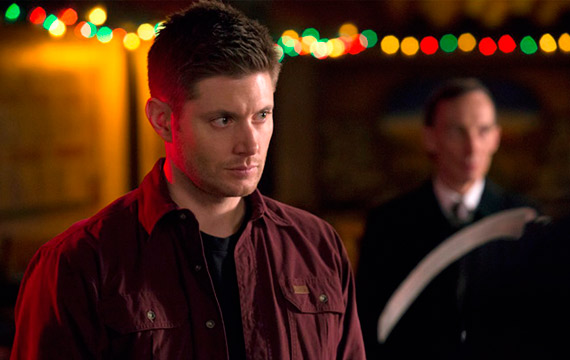 The Supernatural season finale airs this Wednesday and it seems like Dean’s struggle with the Mark of Cain gets so serious, Death himself makes an appearance.

Sam and Dean are still struggling with a way to rid Dean of the Mark of Cain. The longer it takes them, the closer Dean gets to going off the deep end (and he may reach his breaking point this week). As Sam, Dean and Cas race against time to figure out how to remove the mark, it appears Dean makes a drastic plea that could mean making a deal with Death.

Keep scrolling to see what’s in store in the Supernatural season finale:

Dean (Jensen Ackles) makes a shocking decision regarding the Mark of Cain that would change not only his life, but Sam’s (Jared Padaleck) too. Meanwhile, Crowley (Mark Sheppard) and Rowena (guest star Ruth Connell) face off and Castiel (Misha Collins) gets caught in the middle. Phil Sgriccia directed this episode written by Jeremy Carver (#1022). Original airdate 5/20/2015.

Don’t miss the Supernatural season finale, Wednesday night at 9/8c on The CW!

What are your season finale theories? We’d love to hear them in the comments below!

I Need That Look! 'The Royals' Episode 1.10: Our Wills and Fates Do So Contrary Run