Sharknado 3 is set to premiere on Syfy this summer and Archie comics are getting in the spirit by releasing a special edition comic, Archie vs. Sharknado (not a joke).

The issue will be released the same day that Sharknado 3: Oh Hell No premieres on Syfy. According to The Hollywood Reporter, the comic is a one-off issue and was “co-written by Archie veteran Dan Parent (who also draws the story with Rich Koslowski) and Sharknado director Anthony C. Ferrante.”

The comic’s description from the website teases: “It’s that time of year in Riverdale! The end of the school year. Time for beaches, barbecues, fun in the sun and… SHARKNADOS!?! That’s right, get ready as Archie and the gang brave the storm of a tornado full a sharks that riffs off the pop culture phenomenon known as Sharknado! The story unfolds as sharknados are spotted on the “Feast” Coast! Our heroines have to figure out how to get back to Riverdale, where the storm is about to hit next. Soon Archie and the gang go, go, go as they battle the Sharknado-ravaged Riverdale! Who will live? Who will die? Will this take a BITE out of the end-of-the-year prom? Uh….probably!”

The new issue will feature three different covers: one by Parent, one by Afterlife with Archie artist Francesco Francavilla, and the cover featured below, which is by Chilling Adventures of Sabrina‘s Robert Hack.

Here’s one of the Archie vs. Sharknado covers in all its glory: 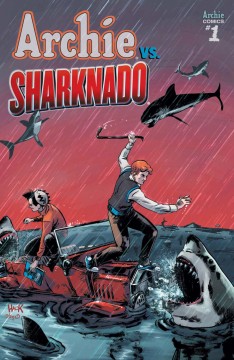 Archie vs. Sharknado will be available in comic book stores and digitally July 22nd, the same date as the Sharknado 3 premiere, for $4.99.