Linda Gray And Josh Henderson Talk About Modernizing ‘Dallas’ For 2012 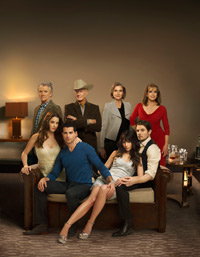 So how does Linda Gray feel being back in the saddle on Dallas? It feels fantastic according to the stunning actress who is best known to fans as Sue Ellen. Linda Gray along with the charming Josh Henderson sat down with us to chat about the challenges in bringing back Dallas and modernizing it for 2012.

Linda Gray: It’s a daunting task. I absolutely applaud the writers. There’s a group of nine writers on the show, executive producer Cynthia Cidre being the lead writer, and before we started shooting, they had a lunch for us in Raleigh Studios in LA. They introduced us to the nine writers that would be writing each show… Which doesn’t happen to actors, we don’t get to meet all the writers upfront. It was so lovely.

Then they took us into the writers’ room, and I’d never been in a writers’ room before. We couldn’t stay long because we could find out to many things. We had to go because the actors were like ‘Where’s my role?’

Josh Henderson: Every character had their own color of cards. It was like the Dallas first season bible. I was going ‘No way! No way!’

Linda Gray: I think it’s been respect though. There’s been a respect for the full show. Not just for us, but for the full show. With the old characters, you know where we’ve been, but with the new guys, we don’t have history – yet. We will. It’s truly a miracle what they’ve done. In a short period, in like 50 minutes or something, you have a sense of who these people are already. They haven’t cheapened the original show… Which is a lovely thing. They have just taken the beauty, and given it respect… and just taken it higher.

Did you think it was important that the series be a continuation instead of a remake? Would a remake have been a mistake?

Linda Gray: I keep quoting Patrick Duffy. It’s year fourteen for us rather than a twenty year lapse.

Josh Henderson: I think there’s only one way to have done this successfully and I don’t think you could have ever done it without the original three. We have other cast members from the original that come through and show their faces, and that’s exciting for the original fans. Having them solidifies us – Dallas is back. No one could ever re-do J.R. or Sue Ellen. I think that really solidified us with the original audience, and hopefully some of us younger actors can bring in younger viewers that weren’t around for the original to give us a shot. I truly believe if they tune in, they’ll be hooked. The show does the original justice.

Linda, where has Sue Ellen been the last twenty years? I heard you mentioning before that you wanted to know what she had been up to… What has she been up to?

Linda Gray: I take my role very seriously. Sue Ellen was a big part of the show. I didn’t want her to be a continuation of who she was then. I thought that in twenty years, Sue Ellen had grown in leaps and bounds. Still interesting, still complex… but fascinating. I wanted the old audiences to be reminded of what she had done, and then I wanted a brand new Sue Ellen for the new audiences. So I took it very seriously, I wanted to know as an actor where she had been and why did she pull dear John Ross to London with her and put him in boarding school. Where’s she been and who has she been with? Has she addressed the demons that were a part of her life? And the answer is yes. I took those questions that I had about Sue Ellen to our executive producer when I first saw the script, and I said, ‘I’d like to know where you’re going to take her?’ Because if they were going to take her down like they did before [laughs]… It really wasn’t where I felt that she would be. But I wanted to know from them, and our executive producer was wonderful and said, ‘You know the character better than anyone.’

So I told her some ideas about where Sue Ellen has been, and she was open and receptive.

We can’t wait for the Dallas premiere tonight on TNT at 9/8c! We’ll be watching! Will you? Keep checking back for even more Dallas coverage! And check out a picture of FanBolt editor Emma Loggins with Linda Gray and Josh Henderson!