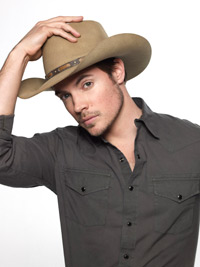 Dallas newcomer Josh Henderson is a lucky man. He plays J.R.’s son on the reboot of Dallas which premieres tonight on TNT. Henderson knows exactly how lucky he is though, and he admits that the day he found out he would be playing John Ross – it was one of the coolest days of his life.

Josh Henderson: It was pretty crazy. I knew they were going to be seeing a ton of people. I actually knew they were bringing the show back pretty early, so I met with Warner Brothers probably 4 months before my audition. I knew one of the guys there, and I just wanted to say, “Hey, I know you’re bringing Dallas back. I’m from Dallas, and I’d love to audition.

I was one of the first to audition, and Jordana was actually cast first. And when I went in, our executive producer Cynthia Cidre said she knew I was John Ross from the second word out of my mouth, but she couldn’t tell me that obviously. So I left, and then 30 minutes later my phone rang, and they said I was testing for the role. Two weeks later, I went in to test and there were a couple other guys there. I walked in the room, and Peter Roth (the president of Warner Brothers) was humming the theme song. He was so excited that I was there, and it made me feel like I could just have fun. I got a call really quickly that I had gotten the role. It was one of the coolest days of my life. This is a really big deal to me. I have the coolest freaking role for any young male actor out there. Playing J.R.’s son… so many people wanted this.

How is John Ross similar to J.R.? And how is he different?

Josh Henderson: Well he is the son of J.R. and Sue Ellen. As soon as you start to watch the episodes it becomes apparent that he’s a mixture of both. He’s a very passionate man about oil. He wants to do exactly what J.R. did back in the day- expect he wants to surpass J.R. if he can. He knows that’s going to be a tough road, but he also really seeks the respect of his father and his mother. He doesn’t have a good relationship with his parents right now. He resents both of them for different reasons. I think sometimes he feels alone, but he almost likes the challenge. He’s an intense guy, and I definitely play him hoping to keep not only the characters in the show guessing, but I also want to keep the audience guessing. That’s my goal, for them to never really know what I’m up to.

There’s an amazing love triangle here. Well more than a triangle I guess. Can you talk a bit about how that’s going to evolve over the course of the season between you, Elena, Rebecca and Christopher?

Josh Henderson: It’s an interesting thing, because you’ve got the history with Christopher and Elena. Obviously we all grew up together, but Christopher and Elena were together originally. I think John Ross always had a thing for her and knew that it was territory that he couldn’t go to at the time. Through high school and college, it was very much about Christopher and Elena, and I was just the cousin. So now that we’re grown up and Christopher is marrying Rebecca, and he’s broken up with Elena… It’s a very big storyline… What happened? How did they break up? There was an email… there’s all kind of crazy things that happened.

And it’s a very interesting thing when you hear about how John Ross and Elena came together. It makes for a great juicy storyline throughout the entire season, because not only are Christopher and John Ross battling over what they do professionally – him being in new green energy and me saying ‘That’s great, but we’re Ewings – We do oil.’ – but we’re also fighting over – not fighting over a girl, but those feelings never had real closure. John Ross is very passionate about Elena, and it makes for an intense storyline. We’re going to take an audience for a ride with that love story for sure. It’s complicated, especially with how John Ross lives and does business, and there are other women out there that are very J.R.-esque as well. He truly does care about Elena though… so dilemmas.

We can’t wait for the Dallas premiere tonight on TNT at 9/8c! We’ll be watching! Will you? Keep checking back for even more Dallas coverage! And check out a picture of FanBolt editor Emma Loggins with Linda Gray and Josh Henderson!