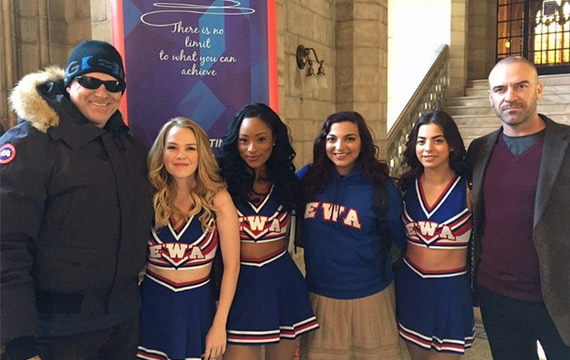 The CW may have passed on the Cheerleader Death Squad pilot, but that may not mean the show is completely dead.

The one-hour pilot followed a former CIA agent-turned-teacher who realized that his elite students at a Washington, D.C., prep school have high level access through their personal connections — and trains them to be his eyes and ears in the world of international espionage so he can make his way back into the CIA. It starred Alan Van Sprang as the former agent and Abbie Cobb, Gia Mantegna and Pepi Sonuga as the titular Death Squad.

The show’s executive producer Sabrina Wind sat down with TV Line to spill some deets about why the series didn’t join The CW family and what’s next.

“The best way to describe it is that there were some creative differences … that weren’t illuminated until we were very close to shooting,” stated Wind. “By the time we learned what it was [The CW] wished they were getting from us — or what they needed for their viewership, versus the story we were on course to tell — there wasn’t enough time to course correct. So we shot the pilot and talked about whether or not we could change it enough to make it more of what The CW would have wanted in the end. They’ve invited us to possibly keep working on it, but we’re not sure what we’re going to do. There was just a feeling that it wasn’t quite ready at this time.”

So what happens to the show now?

“Either we’ll redevelop it, or you might see it come out in a different form,” Wind told the site. “[Writer/producer] Marc Cherry and I are working on all sorts of ideas with it.”

Head on over to TV Line to read more and let us know what you think of the series in the comments below!