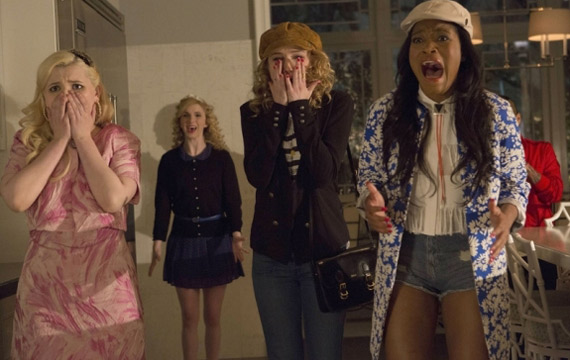 It’s safe to say that Scream Queens is one of FOX’s most highly anticipated new series: it’s scripted from the demented mind of Ryan Murphy, stars some of Hollywood’s brightest young talent and JAMIE LEE CURTIS!

Well, it looks like Fox realizes it too and will be premiering the twisted new horror comedy series at Comic Con this year! Stars from Scream Queens and Ryan’s hit FX series American Horror Story will share a panel and as if that weren’t awesome enough, the first episode of Scream Queens will be screened as well!

Below is a list of the shows that are confirmed to attend this year’s SDCC so far, with more details on the AHS/Scream Queens panel (via The Hollywood Reporter):

• DAMIEN (A&E) Executive producer Glen Mazzara will offer a first look at The Omen follow-up with stars Bradley James, Barbara Hershey, Megalyn Echikunwoke and Omid Abtahi — who will all be joined by a special guest.

• THE LAST MAN ON EARTH (Fox) Will Forte, Kristen Schaal, January Jones and EP Chris Miller will look back on season one and preview season two.

• MINORITY REPORT (Fox) The freshman drama will have its world premiere screening followed by a Q&A with stars Stark Sands, Meagan Good and other cast and producers.

'Pretty Little Liars' Poll: Which Mystery Do You Want Answers To Soonest?