Troubled Buffy the Vampire Slayer actor Nicholas Brendon has checked back into rehab after a few recent run-ins with the law.

According to The Hollywood Reporter the actor started treatment Monday at a California facility and is receiving help with “depression, alcoholism and substance abuse issues.”

“Nicholas is excited for the opportunity that comes with recovery,” his manager said to the site in a statement. “He knows it will be a long and difficult road, but he’s happy that he’s receiving the help he needs. We support him 100 percent.”

The initial announcement, which you can read below, was made via Brendon’s Facebook page: 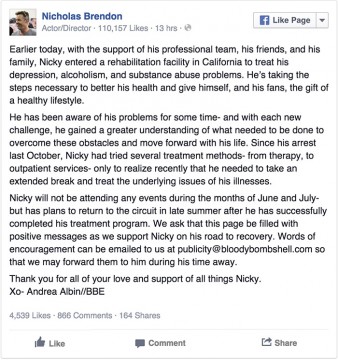 The actor recently revealed that he feels a large amount of his issues stem from being abused as a child.  He previously told  Tallahassee Democrat, “When I was a kid, I was molested for two years by a teacher. And that’s never been talked about anywhere. From that moment, my life changed immensely. I haven’t talked about it because I didn’t want to use it as a crutch. I’m seeing as I get older that it did have a huge, huge effect on me. I always thought it was something I could brush aside, and it’s something I can’t brush aside.”

We hope Brendon receives the help he needs.