A new episode of iZombie aired last night on The CW, which means we’ve got our fashion picks ready to go!

We’re nearing the end of the show’s first season and Liv’s secret isn’t a secret anymore now that Peyton’s seen her go full zombie. This week’s episode probably had more gore than we’ve seen from the show thus far, but between all the butt-kicking and brain-eating, Liv and Peyton still managed to don some pretty cute pieces.

We loved Liv’s cuffed thermal from last week and this week’s thermal option was equally as cute. The embellished cuff at the end of the shirt’s long sleeve thermal, featuring soutache appliqué and mesh inserts was what sold us on the top. Little details like that can take a potentially boring shirt (like most thermals tend to be) and wake it right up. It’s the perfect layering piece. 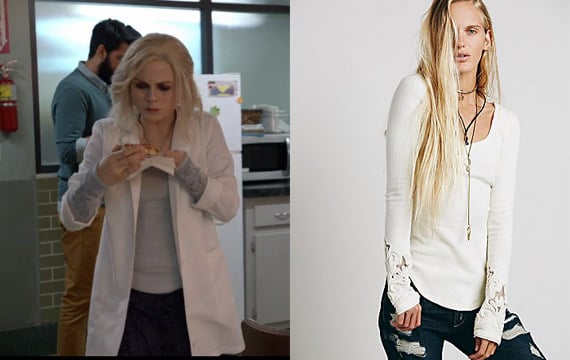 Liv’s Free People Masquarade Cuff was originally $68 but is currently on sale in multiple colors for $49.95.

Peyton may like to wear furry boots and booty shorts around the house, but don’t let that make you thing the girl can’t dress. She actually looked super cute (minus the head-wound) during the moment she found out her bff is an undead bff. Her silk top was subtly textured by animal spots and the detailing like the ladder stitching and keyhole cutout, helped make this a great transition shirt…good for day or night. 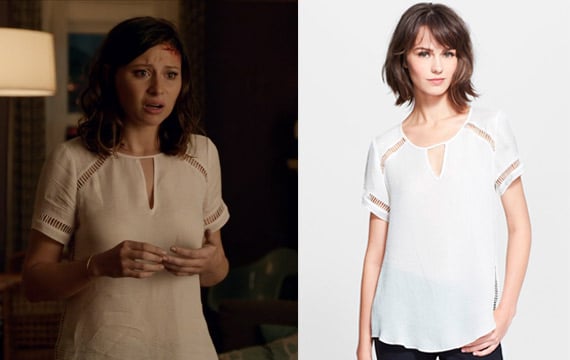 Peyton’s Ladder Stitch Textured Silk Top by Rebecca Taylor was carried here for $150, but is no longer for sale.