This past weekend at the ATX Festival in Austin, I was able to sit down with Younger star Sutton Foster and ask her a few questions about tonight’s season finale. Having fallen in the love with the series along with many other fans, I was delighted that the series was renewed for Season 2 – which according to Foster will begin filming in September.

So I have to ask, for you personally – Do you want Liza to be with Josh or Charles?

I don’t know. That’s what I like about the show. They’ve provided her two viable options. There’s something about Josh. Obviously, they’re at two separate points in their life, but I do think their relationship is real. I don’t think it’s just like this fling. I’m also curious to see where things go with Charles… it seems like the relationship with Josh might have a shelf-life whereas the Charles relationship may have more potential. But I don’t know. Darren doesn’t tell me anything, so I don’t know how it will play out.

Is there hope for Liza and Josh after last week’s episode where you told him the truth?

All I can say is I think Liza got in over her head. I don’t think she went in to hurt anyone. She’s not a malicious person. Her intentions with lying about her age were to get a job. That was the way she could get into the workforce. Getting caught up with Josh, and even with Kelsey, and these relationships that she’s formed – she doesn’t want to give it up. I’m glad she told him, because it’s the right thing to do – and I hope that Josh will understand. I think she’s hopeful that he will understand. But she did also lie to him… so I’m curious to see how it plays out – I mean I know how it plays out, but I’m curious to see how it plays out in the future. 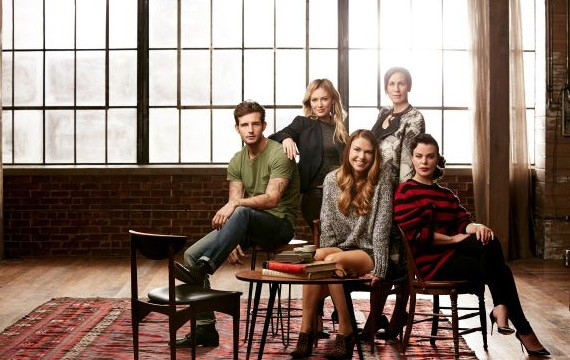 Any chance of ever seeing Liza do karaoke, and us getting to hear you sing on the series?

Could we ever see your brother Hunter on an episode, maybe next season?

Ohmygod. I don’t think so. There hasn’t been talk of that… yet. But that would be hilarious. I would like to be his sister on a show. But it would be great. He would definitely fit into that world. It would be great to have him around.

How was it doing the Bunheads panel and seeing everyone again?

It was really nice. I’ve become really close with Amy (Sherman-Palladino) and her husband, Dan. My husband and I hang out with them quite a bit in the city. I’ve remained very close with her. I hadn’t seen Staecy (Oristano) in awhile even though we’ve remained very close, and Kelly (Bishop) is the same – the last time I saw her was over last summer. It was really great to see them. We all felt like we were apart of something truly special – to celebrate it here and have so many people who still love it and want to talk about it… it’s cool. I wish it had lasted longer, but it was great to be apart of something of such quality. It was something that was truly special.

Any chance we’ll see you and Amy working together again in the future?

In the spirit of ATX and the reunions they feature, what series would you love to see a reunion here for?

Were you Team Noel or Team Ben?

Sutton isn’t alone, I have my fingers crossed for a Felicity panel too. Please ATX?!

I should also note that I’ve been a huge fan of Foster’s for quite sometime, so the opportunity to sit down with her and chat was a huge honor. Despite being a little tired from travel and a recent cold, Foster was absolutely lovely. My admiration for her only continues to grow, and I thank her and TVLand for their time last weekend!

Be sure to check out the rest of our coverage from ATX Festival 2015!