(Spoilers ahead!)Last night’s iZombie season finale was pretty emotional. Liv’s brother’s life hangs in the balance while she has to look on, unable to help, Blaine is now the human leader of a brains-ring that supplies zombies and Major is (possibly) cured of his zombie-ism, thanks to Liv using the last bit of the cure on him.

With so many things on Liv’s plate this week, it’s a wonder she remembered to put pants on at all, but our girl has it all together and still managed to look adorable while trying to stop her world from crumbling down around her.

Liv’s striped henley top with crochet sleeves caught our eye for its detailed sleeves, which is clearly a detail Liv looks for when she buys shirts (See: Exhibit A and Exhibit B. We love her cute and casual style, which is a nice alternative to the many fashion-driven shows that dress characters in styles no one could pull off in the real world. 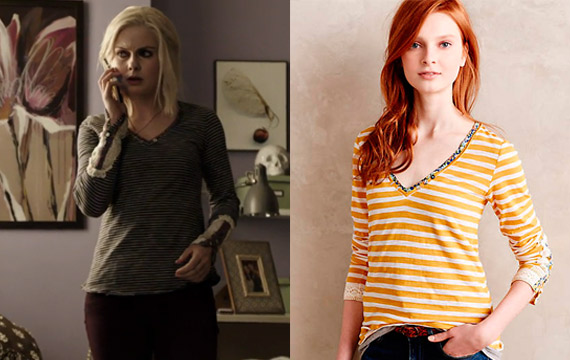 Liv’s Lata Tee from Anthropologie is no longer available online, but there are a couple of them for sale on eBay so act fast!

Let us know which season finale looks you fell in love with in the comments below. We’ll be back for iZombie‘s second season to keep up with Liv’s style evolution!