E3 News! At yesterday’s EA panel, BioWare announced, via a cinematic trailer that somehow blended Johnny Cash with Mass Effect and made it work, that the next installment of the beloved franchise, Mass Effect Andromeda, will be dropping out of FTL travel at the end of next year.

That’s right, Mass Effect fans! The time has come; and by “the time”, I don’t mean our traditional 50,000-year extinction cycle at the hands of the Reapers. I mean the time to step into the armored boots of a new hero of the Mass Effect universe.

As you may have surmised from the name, Andromeda will be taking us way out of our comfort zone (and time), far into the future. Shepard’s heroics have opened up the universe for human exploration, and per the trailer, and a few hints on the BioWare Blog, exploration will indeed be the central focus of the game.

The trailer opens up like a spaghetti Western, fading from black onto a sand-swept world, backlit by Johnny Cash’s haunting cover of “(Ghost) Riders in the Sky”. An armored figure selects the world from six diverse options (I like the sound of that already), and Mass Effect-style action ensues.

From the BioWare Blog, “You’ll be exploring an all-new galaxy, Andromeda, and piloting the new and improved Mako you saw. And through it all, you will have a new team of adventurers to work with, learn from, fight alongside of, and fall in love with”.

Yup, you read that first sentence right, my friend. The Mako made a triumphant return toward the end of the trailer, albeit a slightly less bouncy one than usual, along with what appears to be a jump-pack and, of course, the series’ trademark Omni-tool. 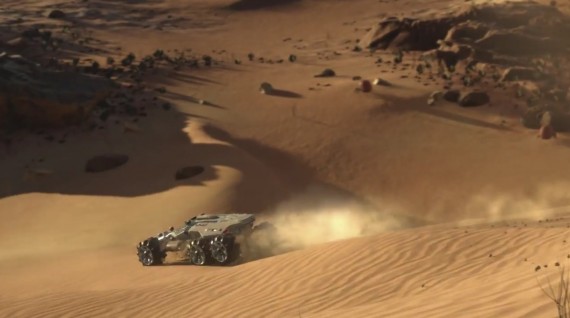 BioWare stated in the same blog post, “We knew we wanted to start with a foundation composed of the best parts of any Mass Effect game: exciting new worlds to discover, great characters, and intense action. At the same time, we clearly wanted to expand the definition of what you should expect from a Mass Effect game”.

A renewed focus on exploration should be a welcome change for fans of the original game, and the promise of what seems to be Mass Effect 3-levels of excitement will hopefully keep fans of the more action-RPG elements of the two sequels around.

The protagonist, who is not, according to BioWare, the same character as the armored explorer in the trailer, will be a “human, male or female”. The developers have not stated who the protagonist is, or whether he or she will be a player-customizable character, but evidence suggests that he or she will be a marine or an explorer. Maybe they’re on their way to N7 status? The character in the trailer is wearing N7 armor after all. Perhaps he’s their instructor, as the Mass Effect Codex states that dropping soldiers onto hostile and combat zone worlds is a key part of the N1-N7 training program.

Other theories abound that the character in the trailer is an antagonist. Perhaps he’s another rogue Spectre, or some kind of mercenary or bounty hunter with stolen armor. Maybe there was a hole.

I guess we’ll be waiting until the end of the year to find out, though, so stay tuned!