E3 News! Indie developer Skyshine has moved their game from kickstart to kickbutt, opening it up for preorder after releasing their new trailer to the excited E3 enthusiasts (say that five times fast).

Back in September 2014, a little studio called Skyshine began a kickstarter campaign for a cool idea. Imagine combining Happy Wars, Oregon Trail, and Mad Max, and you’ll have a fairly accurate image of this game in your head. Bedlam is a post-apocalyptic game that blends turn based strategy with over-the-top action and a thrilling narrative. GoBedlam.com describes it as “A thrilling post-apocalyptic roguelike RPG featuring our unique blitz battle system – Inspired by great games like The Banner Saga, FTL and XCOM”.

The wars and “black science” of humanity’s Barren Age has left the world an arid waste populated by four factions, Marauders, Mutants, A.I, and Cyborgs. One major city is left standing in the wake of the apocalypse, the overpopulated Byzantine, “a technological marvel imprisoned by the twisted wasteland of Bedlam”. You play  as the Mechanic, the pilot of a dozer (think steampunk Jawa Sandcrawler mixed with Halo 3’s Elephant) who’s goal is to assemble a battle crew, load them up, and reach the legendary utopia across the desert, Aztec City.

But here’s the catch:

You don’t get to save.

Each time you play Bedlam, you start with a dozer and whatever crew you pick. Your objective is to get yourself and as many of them there as you can. Crew deaths are permanent, barring very rare technology that can revive or clone them.

The travel portion of the game takes place on the bridge of your dozer: 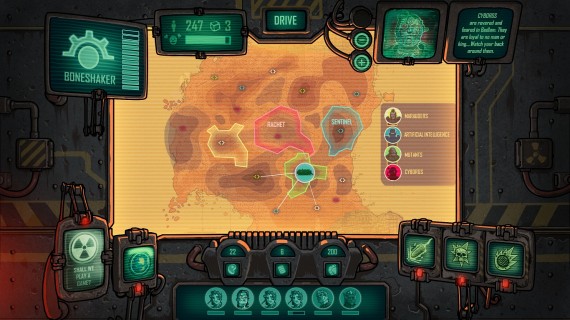 From here, you can monitor your dozer’s status, your resources (Meat, Metal, and Crude), your crew’s health, and your weapons. You select where you want to go, and the travel screen shows your dozer plowing through wherever you sent it.

As you journey through the sand wastes of Bedlam, you’ll encounter members of whatever faction controls your current area, random, extreme fluctuations in weather, NPCs, and bizarre world mechanics (like time-bending Tachyon Mist, or dust storms that eat your molecules. Or zombies.) all of which lend the game it’s name. These effects can also appear without warning in the midst of combat, turning the tide for or against you in an instant.

Combat is turned-based, though with no character order (whoever you pick to move/attack can do so). It consists of four main classes, Frontliner, Trencher, Gunslinger, and Deadeye, and two special classes, Mutant/Cyborg or Veteran (more on them in a second). When a fight breaks out, you select your fighters from your crew, but you don’t get to see the enemy’s full strength until the battle actually begins. So, you have to blend a bit of luck with your strategy. 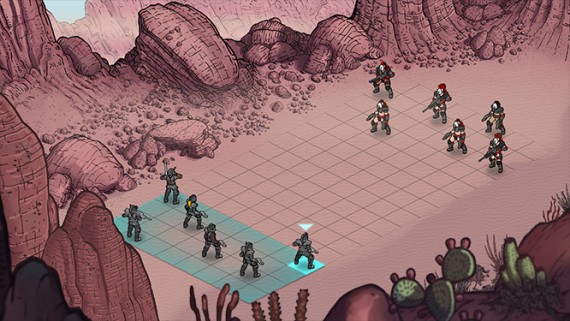 Once your units are placed, the full battlefield (complete with cover and hazards) appears. 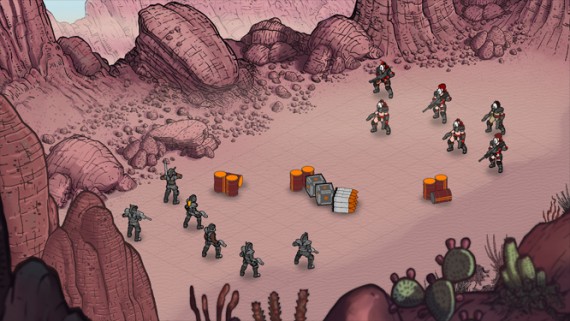 You also have to account for what upgrades you’re currently rocking on your dozer, as those can change the way you want to deploy your troops and how you attack the enemy.

As your loyal (or are they??) crew battles through Bedlam, exposure to the bizarre world can lead to health effects and mutations, starting them on the path to becoming a mutant or a cyborg. Should they choose not to turn and face the change, though, they can become a Veteran. Veterans rely fully on their human creativity and prowess to overcome enemies, while Cyborgs and Mutants gain unique special abilities. Choose wisely, young one.

Skyshine’s set release date is fall of this year, and money from preorders is still going into improving the game.

For more in-depth info on Bedlam, check out GoBedlam!

News from E3: Skyshine's Bedlam is a Go