With all of our articles and coverage of Season 4 of the ATX Festival now up, I can sit back and reflect on what an amazing event it truly was for Jasmine and I. As we walked through the airport before departing back to Atlanta, I saw a scattering of guests arriving and still being more than gracious to the fans who approached them. As we walked to the gate, I heard 4 girls singing the Dawson’s Creek theme song. The festival was over, but the spirit of the festival, and the moments that the fans experienced, still lived on.

So how did FanBolt’s second year at the festival compare to the first year? Well, it was different. No one can deny that. The Gilmore Girls reunion presented a challenge to the festival. It was noticeably larger and had of an actual convention feel in comparison to last year. Last year, it felt more like friends just hanging out and geeking out together. The bigger crowds this year weren’t ideal, but it was what you made of it.

I waited 2 hours in the hot sun for the Gilmore Girls panel to start. I watched two people pass out and felt like I was coming close myself, but I made the best of the situation and ended up meeting an Australian fan who was actually a fan of FanBolt. After that, the line didn’t seem so bad to me. It may have been a lot hotter than we would have liked, but it was an opportunity to make new friends and reminisce about a few of our favorite TV series.

We sat down with series creator Matt Nix and EP Michael Horowitz along with series’ stars Jessica Szohr and Beth Riesgraf (Check out the coverage here: USA Network’s Complications at ATX Festival).

That night we went to the Complications premiere and then grabbed dinner with a few friends. Afterwards, we made it over to the opening night party where we first encountered Girl Meets World stars Ben Savage and Rowan Blanchard. Both Jasmine and I grew up on Boy Meets World, and of course now adore Girl Meets World. Being able to tell both of them how much we loved and appreciated their work was a really special moment.

We were up early on Day 2 beacuse we had the pitch competition at 10am to attend. The competition is a really unique event at ATX. Ten pitches (that have been selected from those submitted to the festival) have the chance to do a 3 minute pitch in front of industry executives. It was fascinating to watch, and something I highly recommend to those visiting the festival in the future. The girl who won had a rather unique pitch – Bully, which was about Teddy Roosevelt and those surrounding him… in puppet form. Think Team America on Adult Swim – but a little bit more out there. I absolutely loved it.

After the panel finished, we were able to sit down with series creator Michael Jacobs along with stars Ben Savage, Rowan Blanchard and Sabrina Carpenter (Check out our coverage here: FanBolt’s Exclusive Girl Meets World Interview).

Both Rowan and Sabrina are two incredibly impressive young women. I don’t think I’ve ever seen such maturity and wisdom at such a young age before. One of the things that really stuck with me was Rowan’s thoughts on why she feels this series is so loved by fans.

“I feel like many kids shows are afraid to talk to kids and they talk down to kids. They kind of treat kids like “Oh, because you’re a kid I’m going to over-explain this.” We feel like it’s our job to talk with these kids and talk with these adults and invite them rather than instruct them.” Rowan stated. 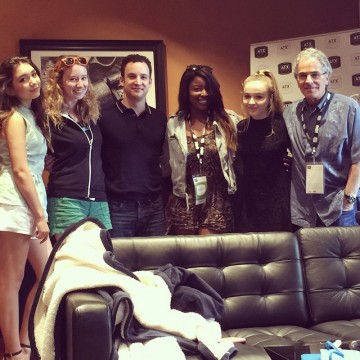 We could have spent all day chatting with them, but after 30 minutes, we had another interview we had to jet off to.

And that interview was with Younger star, Sutton Foster. I’ve adored Sutton long before I ever saw her on the cancelled-too-soon series, Bunheads (which was also highlighted at this year’s ATX). However, being able to meet her and chat in-person was one of the biggest highlights of the festival for me (Check out coverage here: FanBolt’s Exclusive Interview with Younger Star Sutton Foster). Sutton is just as kind and quirky as you imagine her to be from the roles she takes on. 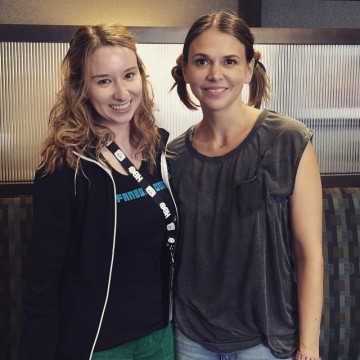 We finished off the night grabbing some amazing BBQ at Lambert’s BBQ and then hit up HandleBar for a few drinks with our friends, the Dreamwriters.

Jasmine had a panel first thing for Empire. While my first event of the day was A Conversation with Julie Plec and Kevin Williamson.

A Conversation with Julie Plec and Kevin Williamson

I have great admiration for both Julie and Kevin. They’ve accomplished truly amazing things in their careers, and getting to hear how they first met and started working together was really interesting. They actually met back in the late ’90s while working on Scream. Plec was actually working as Wes Craven’s assistant at the time.

Next up on my schedule was a one-on-one interview with Gilmore Girl‘s Scott Patterson. Scott and I chatted about his work on the show, his experience with GG fans and also his passion for photography. He’s actually an amateur photographer. A curator of a very prestigious private collection reached out to him, and now they’re working on doing a gallery show in New York (We’ll keep you posted on the details). 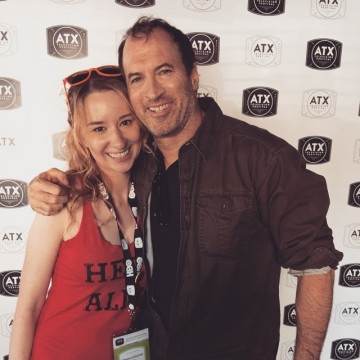 Next it was off to the main event….

I had managed to somehow get fast passes for the main event that night – The Gilmore Girls Reunion. Though that still meant a 2-hour long wait in the sun for me. The festival tried to make the wait as pleasant as possible – they brought around water and even pop tarts. But what matter was the actual reunion, and that was a truly incredible event. 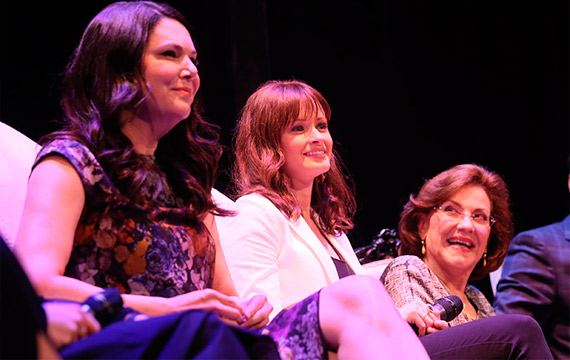 An emotional tribute to Ed Herrmann, favorite cast stories from set, tales about where each actor thought their character would be now – it was the perfect fan event – At least for me and two of my new friends! 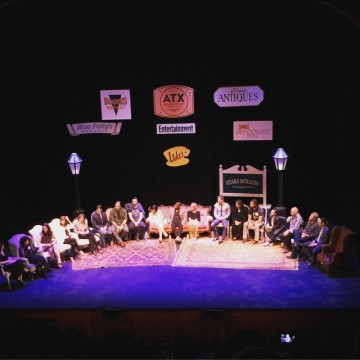 After the reunion ended, we went to grab some sushi and then made a stop by the Closing Night party, where I finally got to meet my role model (and inspiration to become a writer) Amy Sherman-Palladino. Needless to say, my interaction with her was the highlight of the festival for me. 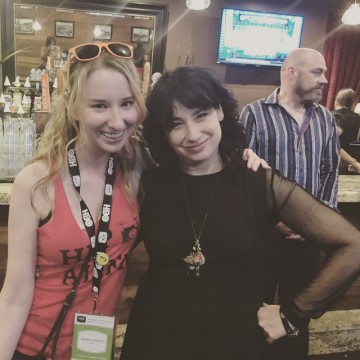 On the last day of the festival, we spent some time in the press lounge before I jetted off to one of my favorite panels of the convention, the Dawson’s Creek Script Reading.

Originally I had hoped that this script reading was going to have a surprise guest… (say… I don’t know… maybe a James Van Der Beek) would appear on stage to read the lines that changed his life nearly 20 years ago. While that would have been awesome, what awaited us was the coolest panel I could have hoped for. Here was the casting:

Each of the actors set at a long table on stage and read through the pilot script. Kevin Williamson narrating the in-between scene descriptions. The audience couldn’t help but erupt into laughter when Joey (Patrick Andrews) spoke of having breasts or when Pacey (Abigail Spencer) made the moves on Tamara (Arielle Kebbel). 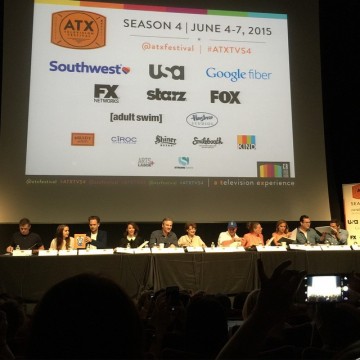 It was an incredible idea for a panel and one that I hope ATX continues to do each year with additional beloved series.

The last panel we had before heading back to Atlanta was for HBO’s The Leftovers. We had only expecting series creator Damon Lindelof and EP Mimi, but there was a pleasant surprise for fans – Anna Dowd, Carrie Coon and the one and only Christopher Eccleston also joined the panel.

This panel was a really great example of why ATX is so unique. The first audience question asked was from Vampire Diaries EP who wanted to know why Damon decided to do a full episode on Christopher Eccleston’s character (who wasn’t one of the series’ leads) so early on in the series.

The second question was asked by Haven‘s Emily Rose. Emily wanted to know how the actors were able to separate themselves from the rather dark and emotionally heavy content after they would wrap filming.

The main question we were hoping to hear answered was how Damon was going to explain the swift of the series setting to Austin, Texas. All he would say on the matter is that he had a great idea about how to continue the story, and that he would leave it at that (we’ve since seen how in HBO’s new promo).

After speaking with each one of the panel members (and grabbing some photos), we headed back to our hotel to head back to Atlanta. Another ATX under our belt, we couldn’t have been happier with the interviews we did and the panels that we attended. My Gilmore Girls fangirl-marking aside (my oddly shaped sunburn), I had an incredible weekend and was immensely grateful that we had the chance to cover the festival again this year.

A huge thank you to all the actors, actresses, and show creators for their time, to all the PR folks that were so great in helping schedule everything out, the ATX volunteers, and most importantly – to ATX founders Caitlin McFarland and Emily Gipson – they’re true rockstars.