BioWare delivered a powerful cinematic trailer at this week’s E3 conference to herald the release of Star Wars The Old Republic‘s fifth expansion, “Knights of the Fallen Empire”.

The expansion will raise the game’s level cap to 65 and will feature an all-new episodic story, centered around the Outlander and the Emperor of the Eternal Throne. According to a news post on SWTOR.com, BioWare is placing a huge emphasis on story-telling and character development (their specialties) this time around, promising to deliver a rich and compelling narrative, along with new class missions for your character.

The protagonist of the expansion will be the Outlander, a survivor of the Great Galactic War between the Sith and the Republic that ravaged half the galaxy and resulted in the game’s cold-war-frozen atmosphere.

In other words, your SWTOR character.

Players will have two options: to begin the story as a newly-minted level 60 character, or to continue into the story with their current one.

Only a few details have been released, but from what BioWare has stated,  your current TOR character will take up the shiny mantle of the Outlander. According to a post  in the SWTOR.com forums by lead writer Charles Boyd on Wednesday, “your character’s past will be a key part of their identity as the Outlander moving forward. The choices you’ve made, romances you’ve pursued, your class, etc are all a part of who your character is, and those decisions will be honored in KOTFE; often in unexpected ways”. 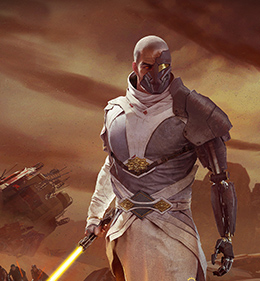 Arcann, The Dark Prince, featured in the trailer

Boyd did not give any details about the story for characters starting at 60 but promised more soon.

He went on to say that the expansion will have a renewed focus on companions, “Companions: there’s a ton of stuff going on with companions in this release, and we’re not ready to dive into most of it just yet. What I can say is that past companions will return in the story, sometimes as very critical parts of the overall story shared by all Outlanders”.

The expansion will be free for all current subscribers starting on October 27 and will come with nine chapters. New episodes will be released periodically, though BioWare has not yet confirmed how often they will come.

For more info, check out SWTOR.com’s page for the article.

May the Force be with you. I think you’re going to need it.

News from E3: Star Wars the Old Republic! Bring Your Character to Level 65